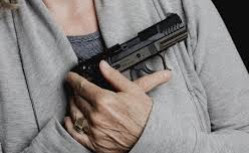 Firearms 'used by victims about 3.6 times as often as they're used offensively by criminals'
Every year, Americans use guns to defend themselves more than 2 million times, according to an unpublished study from the Centers for Disease Control and Prevention that focused on data gathered in 1996, 1997 and 1998.

The findings show that use of guns for self-defense happens more frequently than criminal use of firearms.

“The CDC figures this does not further the leftist agenda,” Limbaugh said, “so they keep it secret, but it has been uncovered.”

Since the 1990s, Florida State University criminologist Gary Kleck and partner Marc Gertz have claimed as many as 2.2 million Americans use firearms to defend themselves every year. While critics have claimed Kleck’s estimates were too high, he has frequently stated that they provide no scientific evidence to counter his findings.

Now it’s revealed that the unpublished CDC study in the 1990s found 2.46 million defensive gun uses, or DGUs, per year.

Kleck provides the following summary of the CDC findings:

In 1996, 1997, and 1998, the Centers for Disease Control and Prevention (CDC) conducted large-scale national surveys asking about defensive gun use (DGU). They never released the findings, or even acknowledged they had studied the topic. I obtained the unpublished raw data and computed the prevalence of DGU. CDC’s findings indicated that an average of 2.46 million U.S. adults used a gun for self-defense in each of the years from 1996 through 1998 – almost exactly confirming the estimate for 1992 of Kleck and Gertz (1995). Possible reasons for CDC’s suppression of these findings are discussed.

On April 20, Kleck said 2.46 million DGUs every year “[implies] that guns were used defensively by victims about 3.6 times as often as they were used offensively by criminals.”

The CDC survey asked about DGUs in the ’90s and included the following question: “During the last 12 months, have you confronted another person with a firearm, even if you did not fire it, to protect yourself, your property, or someone else?”

Respondents were asked not to include scenarios in which they used a gun as part of their job, such as in policing, or for hunting purposes.

Kleck said the “CDC never reported the results of those surveys, does not report on their website any estimates of DGU frequency, and does not even acknowledge that they ever asked about the topic in any of their surveys.”

National Public Radio reported on April 13 that a Harvard University analysis shows “people defended themselves with a gun in nearly 0.9 percent of crimes from 2007 to 2011.”

The NPR report cited Harvard researcher David Hemenway, who claims the risk of possessing firearms outweighs the benefit of having a gun for self-defense purposes.

“The average person … has basically no chance in their lifetime ever to use a gun in self-defense,” Hemenway told Robin Young of “Here & Now.” “But … every day, they have a chance to use the gun inappropriately. They have a chance, they get angry. They get scared.”