15 Stats That Show Americans Are Drowning in 'Stuff' 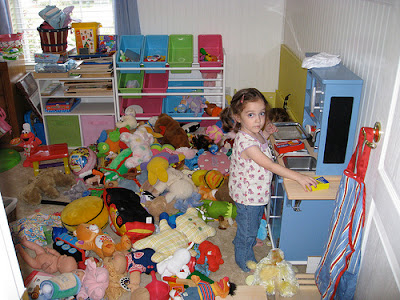 Getting kids to clean up after themselves is a rather unpleasant, ongoing struggle for many parents today. If one’s kids are messy, it’s typically assumed that it’s because of a lack of parental will, i.e., that the parents’ failed to discipline their children.

I wouldn’t want to let parents completely off the hook here, but I will say that we often ignore contextual factors that also work against keeping a clean house, such as the busyness of modern life and… the fact that we simply own a lot more stuff than people in the past.

In America, many people spend a good portion of their free time accumulating possessions, and the rest of that time attempting to clean up those same possessions. Those with children spend many frustrating hours trying to coax their children to do the same.

Here are 15 stats gathered by Joshua Becker for Becoming Minimalist that help confirm the suspicion that Americans simply own too much stuff:

2. The average size of the American home has nearly tripled in size over the past 50 years (NPR).

3. And still, 1 out of every 10 Americans rent offsite storage—the fastest growing segment of the commercial real estate industry over the past four decades. (New York Times Magazine).

4. While 25% of people with two-car garages don’t have room to park cars inside them and 32% only have room for one vehicle. (U.S. Department of Energy).

5. The United States has upward of 50,000 storage facilities, more than five times the number of Starbucks. Currently, there is 7.3 square feet of self storage space for every man, woman and child in the nation. Thus, it is physically possible that every American could stand—all at the same time—under the total canopy of self storage roofing (SSA).

6. British research found that the average 10-year-old owns 238 toys but plays with just 12 daily (The Telegraph).

8. The average American woman owns 30 outfits—one for every day of the month. In 1930, that figure was nine (Forbes).

10. While the average American throws away 65 pounds of clothing per year (Huffington Post).

11. Some reports indicate we consume twice as many material goods today as we did 50 years ago (The Story of Stuff).

12. Currently, the 12 percent of the world’s population that lives in North America and Western Europe account for 60 percent of private consumption spending, while the one-third living in South Asia and sub-Saharan Africa accounts for only 3.2 percent (Worldwatch Institute).

14. Over the course of our lifetime, we will spend a total of 3,680 hours or 153 days searching for misplaced items. The research found we lose up to nine items every day—or 198,743 in a lifetime. Phones, keys, sunglasses, and paperwork top the list (The Daily Mail).

15. Americans spend $1.2 trillion annually on nonessential goods—in other words, items they do not need (The Wall Street Journal).

As it has been said: we don’t possess things; they end up possessing us. Again, discipline and consistency on the part of parents are certainly needed when it comes to bringing up tidy children. But just as children become easily overwhelmed by too many toys, so also the same applies when they are confronted with a huge mess and told to “clean up.”

Raising children is difficult enough, and parents probably don’t need clutter working against them in this task. If they want tidy children, it's better if they own less stuff.