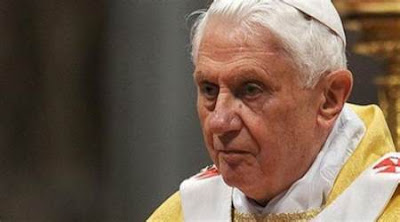 Pope Emeritus Benedict XVI accuses his opponents of seeking to silence him while he also warns against a future humanist dictatorship that may control the world.
In an authorized biography by German author Peter Seewald, Benedict says in Benedict XVI – A Life that accusations that he has interfered in the current pontificate are based in a "malignant distortion of reality."
Despite some commentary in various circles of the Catholic Church that he may have sought to undermine the current pontiff, Benedict said in the book that his "personal friendship with Pope Francis has not only endured, but grown."
The remarks are found in the last chapter of Seewald's book, which is based on interviews that took place in late 2019. The book was published in German on May 4 and runs over 1,100 pages. The book is scheduled to appear in English in November as Benedict XVI The Biography: Volume 1. An Italian version is expected in September.
Benedict told Seewald that he had prepared a spiritual testament that will not be revealed until after his death. He did not elaborate as to its contents. Benedict, who is now 93 years old, resigned from the papacy in 2013.


On the 'Crisis' of Doctrine, Faith

Benedict takes square aim at legalized same-sex unions. He said, "A century ago, anyone would have thought it absurd to talk about homosexual marriage. Today those who oppose it are excommunicated from society."
He linked the issue to infanticide and test-tube babies, saying: "It's the same thing with abortion and creating human life in the laboratory." It is only natural for people who oppose same-sex unions and abortion to fear the "spiritual power of the Antichrist."
"Modern society is in the middle of formulating an anti-Christian creed, and if one opposes it, one is being punished by society with excommunication. ... The fear of this spiritual power of the Antichrist is then only more than natural, and it really needs the help of prayers on the part of an entire diocese and of the Universal Church in order to resist it," Benedict said.
"The real threat to the Church ... is in the global dictatorship of purportedly humanist ideologies," he emphasized.
On the current state of the Catholic Church, he reflected, "Events have shown by now that the crisis of faith has above all led to a crisis of Christian existence."
According to a report at Germany's Kath.net, Benedict remarked, "The spectacle of reactions coming from German theology is so misguided and ill-willed that I would prefer not to speak of it."
In the book, Benedict said, "I would rather not analyze the actual reasons why people want to silence my voice."


On His Legacy, Influence

Regarding his efforts as pontiff, Benedict said: "I didn't just want to promote cleansing in the small world of the Curia, not even primarily, but in the Church as a whole."
Benedict continues to face criticism from within and without the Catholic Church. For example, British author Austin Ivereigh, who has written a biography of Francis, told a Chilean newspaper last year that Benedict's supporters must be brought to heel, asserting they contribute to an environment of "scandal and of division."
Lynda Telford, English author of Women of the Vatican – Female Power in a Male World, said in an interview with Express.co.uk that she "pitied Francis deeply" following the publication of Benedict's comments.
Adding apparent fuel to speculation over an alleged rift between the current Pope and his predecessor, Telford told the newspaper, "Benedict's doing his absolute best to sabotage all the reforms that Francis is trying to bring in." She credited Francis for "reaching out to LGBT people" and seeking reform of Catholic teachings about marriage and contraception. Telford added, "Benedict has no right to interfere."


On the Dubia Challenging Francis

When Seewald asked for comment about the dubia (questions) that four cardinals had presented to Pope Francis about his apostolic exhortation Amoris Laetitia, Benedict preferred to refer to his last general audience.
Paraphrasing his message of April 27, 2013, Benedict said, "In the Church, amidst all the struggles of humanity and the confusing power of the evil spirit, one will always be able to discern the subtle power of God's bounty."
He added: "The darkness in successive periods of history will separate the utter joy of being Christian ... . There are always moments of the Church and a Christian's life in which one deeply feels that the Lord loves us, and that love is joy. It is 'happiness.'"
In 2016, cardinals Walter Brandmüller, Raymond L. Burke, Carlo Caffarra, and Joachim Meisner published a letter that they had sent to Pope Francis that accompanied five questions calling for yes or no answers regarding the pope's teachings in Amoris Laetitia. Among the questions the cardinals asked was whether the apostolic exhortation would allow Catholics who have been divorced and are living in a new union under civil law to receive the Eucharist. Pope Francis has yet to answer any of the questions.

In the book, Benedict discusses controversies such as a "gay lobby" within the Church and how he dismantled it. It also addresses his efforts to address clerical sexual abuse during his time as cardinal and pope.
In an interview at Germany's DomRadio.de website, KNA editor-in-chief Ludwig Ring-Eifel said that the portion of the Seewald's pages that deal with homosexual unions and Benedict's fears of a humanistic dictatorship constitute the most interesting part of the book.
Luigi Accattoli, a journalist and long-time observer of the Vatican, claims that Benedict says in the book that the "gay lobby" consisted of "four/five people" and that he managed to dissolve it. Accattoli asserted that this has never before been revealed.
Seewald has written several books about Benedict and in cooperation with the pope emeritus, among them: Salt of the Earth, God and the World and Last Testament: In His Own Words.