Chinese buy up Canada farms; is Beijing behind it? 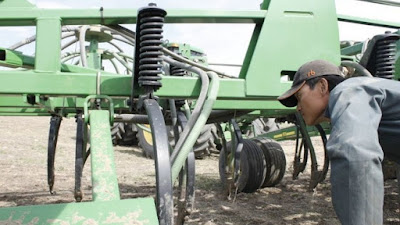 OGEMA, Canada (AFP) – With too few farms in China to feed a burgeoning population, Chinese immigrants have started buying up agricultural lands in Canada and shipping produce to Asia.

But with new investment comes fears that a generation of young Canadian would-be farmers are being squeezed out of the market by newcomers that some suspect are being bankrolled by the government in Beijing.

In Saskatchewan province, home to 45 percent of all arable land in Canada, the price of farmland has risen an average of 10 percent in the last year, and as much as 50 percent over three years in areas where Chinese immigrants have settled, according to farmer Ian Hudson, who lives near the village of Ogema.

Provincial authorities counted a half dozen large investment firms buying up farmlands in the province of one million people, but could not say if any of them are linked to Beijing, nor estimate the size of their land holdings.

"The law in Saskatchewan is clear that investment in farmland in this province (buying more than 10 acres) is restricted to citizens of Canada and permanent residents," provincial agriculture minister Lyle Stewart told AFP.

However, he added, a special investigator was hired to probe "rumors that certain interests are trying to get around our law... that these people are funded by offshore money," as well as "where the investment money is coming from."

"Two or three suspicious cases" were identified that are facing further scrutiny, the minister said, declining to offer further details while the investigation is ongoing.

Stewart noted also that Saskatchewan real estate is relatively cheap, taxes are low, borrowing rates are at a historic low, commodity prices are on the upswing and hence, "conditions are perfect for people who want to invest."

But after Chinese state-owned firms poured vast sums into neighboring Alberta's oil sands -- which forced Ottawa to tighten its investment rules to try to prevent foreign governments from controlling Canadian resources -- many in rural Saskatchewan are quick to believe that Beijing is now targeting their farmland to feed its people.

"Some people say that the Chinese state is behind this. That's wrong," said Andy Hu, the 39-year-old chief executive of Maxcrop, an upstart investment firm that deals in rural Saskatchewan real estate.

"Our investors are people with money and they're looking for a good investment," he said.

A former manager of a Mattel toy factory in China, Hu moved to Canada in 2004 and started a real estate firm in Alberta before relocating to Saskatchewan after seeing potential profits in its "undervalued" farmlands.

China's emerging middle class "needs more protein" and "they're ready to pay to get good food," he noted.

So Hu scoured the province in search of the best lands and set his heart on Ogema, a village of 400 inhabitants.

His clients, most of them investors rather than farmers, and some with Canadian citizenship but living abroad, quickly snapped up thousands of hectares of land in the vicinity, which Maxcrop now leases to local farmers.

Real estate speculation, however, has made it harder for young local farmers to buy their own lands, notes fifth-generation farmer Stuart Leonard, 34.

Sporting a cap and sunglasses, behind the wheel of a monster-sized pickup, Sheldon Zou says he moved with his wife and two girls one and a half years ago to Ogema -- a long way from Tiananmen Square where he protested as a student in 1989.

He bought a 1,600-hectare farm and equipment for $1.5 million, with the help of a loan from his family.

With little actual farming experience he relied on the kindness of locals to show him the ropes. This year for the first time, he is seeding his own canola fields.

For Hu, growing crops is just the start. He points to an abandoned town near Ogema where he set up a sheep farm and hired a young Chinese immigrant and his wife to herd the animals.

Hu says he aims within two or three years to turn the operation into the largest in Canada, with 5,000 sheep, and export all of the meat to China. "The opportunities are huge here," he says.

But Leonard is a bit skeptical.

"Those big corporations, they would never be able to farm those lands themselves. Will they turn us all into employees?" he asks.
https://www.foxnews.com/world/chinese-buy-up-canada-farms-is-beijing-behind-it
Please share this.
Posted by alpha411net at 2:53 PM