How to pay for the future of journalism in Canada 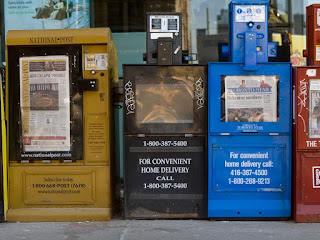 Canadian media organizations face difficult challenges in an age of virtually unlimited internet competition, a dramatic shift toward digital advertising and an unprecedented global economic and health crisis. Ottawa has thus far declined to “take on” Google and Facebook by requiring them to fund local media. That may spark criticism in some quarters but claims that government-mandated payments from internet companies will solve the sector’s ills are unconvincing.

Everyone agrees the media sector is more competitive than ever. News organizations such as the New York Times and Washington Post, digital media companies like the Athletic and the Logic, podcasters competing with mainstream media audio offerings and the CBC’s continued digital expansion all offer compelling and competitive news alternatives. This breadth of choice for Canadian news consumers isn’t the fault of Google or Facebook. It is a reflection of low barriers to market entry and a proliferation of services that often do a better job than many established media companies of serving specialized content.

Claims that digital advertising results in a one-way loss of revenue misunderstand internet-based advertising. For example, Canadian media organizations generate revenues through Google advertising, with revenue sharing that means dollars flow to the U.S. and boomerang back to Canadian firms. Revenue-sharing on digital advertising is common for a range of content offered by Canadian organizations, including videos posted to YouTube and the inclusion of search results on their websites.

Moreover, the economic value derived from linking to content on Canadian media organization websites is trivial for global internet companies. Google does not even run advertising against news stories in its Google News product, while Facebook posts are dominated by videos, photos and personal updates, not links to Canadian news stories.

Notwithstanding these market realities, the Canadian media sector has tried for years to convince the government to intervene, including with tax reforms to remove internet-based advertising with U.S. companies as a deductible expense for Canadian businesses. Such proposals have always been rejected, given that they would make digital advertising more expensive for Canadian businesses and be unlikely to persuade them to shift their ad dollars to local venues offering smaller audiences and a less targeted approach.

Media organizations have also argued that copyright law should preclude internet companies from linking to their stories online, as “news aggregators” typically do. But news organizations do not have exclusive rights over the news. Rather, their copyright is in the specific expression of the news. Links to their articles accompanied by brief descriptions fit comfortably within Canada’s “fair dealing” rules — the same rules media organizations regularly rely on in their own stories, which frequently build on a range of published sources.

Moreover, news organizations that do not want their stories included within services such as Google News need only ask to be removed. But after Google shut down its Google News service in Spain, studies found publisher website traffic dropped by 10 per cent.

In recent weeks, the discussion has shifted to competition law and arguments that “fairness” dictates that Google and Facebook support local media. Though France and Australia have indicated they intend to implement such a system, neither has released many details. In fact, Australia merely plans to release a proposal for public comment later this year.

Appeals to fairness may be hard to resist but crafting rules that would allow a small set of organizations to benefit from internet-linking would invariably lead to difficult line-drawing over which internet content merits compensation, which type of linking qualifies and who is entitled to benefit. Such a system would also likely violate Canada’s trade obligations under the new NAFTA, given that U.S. companies would pay while only Canadian companies would benefit.

What has been left unsaid in recent lobbying is that Ottawa has already committed hundreds of millions of dollars to the sector. Ottawa’s Local Journalism Initiative (LJI) promises to pump $50 million over five years into local media organizations with direct support for new journalists. Last year, the government announced further changes worth hundreds of millions in labour credits to support hiring journalists, at a rate of up to $55,000 in costs per employee.

The problem to date has been that neither program has unfolded as planned. The implementation of the LJI has deliberately excluded some independent news providers in an apparent effort to reduce competition from digital upstarts. Meanwhile, the labour tax credit is still stuck at the starting gate with no reimbursements to date.

The current federal government’s support for the media sector is far from perfect but to its credit the government has rejected gimmicky tax reforms, twisted copyright laws or mandated payments. Rather, its approach is founded on the principled premise that supporting journalism serves the broader public interest and so the public should help fund it.