It's Not A Gun Problem, It's A Culture Problem

Dear President Trump/Senators,
The latest mass shootings have brought several things to the fore. America doesn’t have a gun problem we have a people problem…a culture problem. 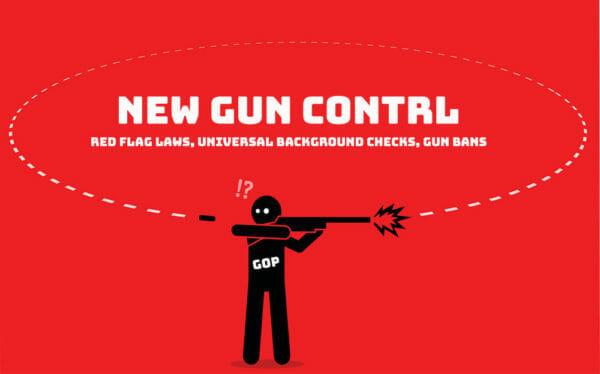 The charge of “racist” has been the hammer used by the Left to shut off discussion of any issue that makes the Left uncomfortable. The President has been called racist by every liberal pundit on TV and in print and every Democrat leader and candidate for president. The President is not a racist. There is NO evidence that he is a racist. Additionally, the term racist has been applied to every supporter of the President.


The term racist has now lost its true edge because of its indiscriminate and wide-spread use.


The new cudgel to hammer the President and all of his supporters is as white supremacist or white nationalist. I’m very active in a lot of activities here in East Tennessee ranging from a 3000 member gun club, to a huge charity that raises money for veterans causes, to a 7000 member church, to a 300+ member car club. I’m 70 years old and I’ve never met a white supremacist or white nationalist.

Whoever these people are, they are in the underbelly of America and are nothing more than gnats in the atmosphere. Calling the president these names is a despicable act and beyond reprehensible. Now we have the Speaker of the House and Democrat presidential candidates saying the white nationalists are an existential threat to the U.S. This is sheer lunacy. This is the type of mental illness that should exclude these people from having guns.

As a loyal and patriotic American how can you stand mute when our president is attacked in such a vile manner? How about debunking whole white nationalists as existential threat to the U.S.? But sadly, Republicans are mute.

Now to the issue of the siren call of gun control. The cause of these, and other mass shootings was NOT guns; it is our sick society. Most of the perpetrators legally obtained their guns. Laws against murder, illegal use of firearms, illegal discharge of firearms, assault with deadly weapons and in California transporting a firearm across state lines that is illegal in the Golden State; all of these laws, and no doubt many others, were violated. None of those statutes prevented these crimes, something nobody seems willing to discuss.

We have a society where violence is glorified. Go to a movie or even watch television and the violence is appalling. I refuse to believe that video games don’t contribute to the violence in our culture. There are many games where killing is the score by which you win. Denying this is putting your head in the sand. The same Hollywood that advocates for gun confiscation are the same Hollywood that glorifies guns and killing in their products.

Let’s address so-called “assault rifles.” What is an “assault rifle?” When anti-gun rights Sen. Diane Feinstein was writing the weapons ban bill, they needed to call this class of weapons something scary, so they called them “assault weapons.” This is a made-up term conjured solely for the purpose of scaring people. I spent 30 years in the Army as an infantryman. We didn’t have assault weapons. So the very term “assault weapons” is a product of the gun control crowd. As Feinstein and her staff were writing the “Assault Weapons Ban,” they had a gun catalog and went through the pages picking out pictures of scary-looking guns. Their ignorance of guns is just astounding.

Now we have gun banners talking about “weapons of war” and “killing machines” to add to the fear and apprehension created by “assault weapons” naming convention. The AR-15 is used by millions and millions of Americans for sport, hunting, and home defense.


It is NOT a weapon of war or a killing machine. As a professional soldier, I would never go to war with any gun I could buy commercially.


The Left has been able to define the language and then police violators of the language via political correctness. The gun control crowd has defined “assault weapons” as scary weapons, and scary weapons are weapons of war and killing machines and thus should not be in the hands of the citizenry. And Republicans are mute.


If Republicans want to lose the presidency and the Senate and the House, then pass universal background checks and “Red Flag” laws. If you want to cave, to surrender, to the insane mania of the media and the Left and pass these laws, then you will lose millions like me, law-abiding, freedom-loving, gun owners.

It is worth time mentioning that the Constitution is a document written to preserve individual rights and liberty and to LIMIT the government oversight of those individual rights and liberty. The Founding Fathers felt so strongly about the God-given rights enumerated in the Bill of Rights that they listed them. These rights are a sign post that says, “government hands off.” The government is forbidden to get between these rights and the American citizens.

So stay away from some form of “universal background checks.”
Now to “Red Flag laws.” Seventeen states have some form of these laws, but only a couple of them even mention mental health. None of us wants mentally imbalanced people or terrorists to have guns. But these laws are a slippery slope to another way for the government to get between a citizen and their right to keep and bear arms. The gun grabbers are salivating about this. They want the government determining who is eligible to exercise their Second Amendment rights. The Left wants some type of process like was in the movie Minority Report, where the government reads the minds of citizens and takes actions to arrest the citizen before they committed some crime. Of course, reading the minds is a bit of hyperbole, but these laws would have government people across the country determining that someone who tweeted, made a Facebook post, wrote an email is a danger to society and they raid that person’s home and take their weapons. This then becomes a Fourth Amendment violation. So we start with a government deciding that something said by a citizen is unacceptable, violating the First Amendment, the government then violates the Fourth Amendment and deprives a citizen of their Second Amendment right.

Another part of this slippery slope is who reports the “unstable” citizen and then who decides whether the accusation is valid? Maybe a neighbor doesn’t like my MAGA hat and believes the crazy rhetoric of the media, and thus, I’m a white nationalist and therefore a threat and call the Sheriff. The Sheriff then conducts a “no-knock” warrant and breaks in my door in the middle of the night. I think this is a real break-in and defend myself, and I am, or an officer is shot. Imaginary? Not so, this happened recently to some unlucky homeowner. Who’s to blame? Who will be held accountable? If you pass these types of laws, these scenarios will play out over the nation.
“Red Flag laws” are another intrusion/infringement of citizens’ rights guaranteed by the Bill of Rights.

The Second Amendment doesn’t allow for the government to determine whether some have rights to own firearms, versus others who don’t. Seriously: Do we really want government holding this power?

What about the path these “red flag” laws would take under a leftist administration, under Democratic control?

“Red flag” laws bring too many unknowns.
Millions of honest gun owners who didn’t use their firearms for mayhem have good reason to feel they are being penalized for crimes they did not commit. This is not an issue about guns; it’s about rights. These laws are repealing the Bill of Rights one chunk at a time.


When are Republicans going to stand up and defend the Bill of Rights? The President campaigned on and has emphasized his promise to defend the Second Amendment.

Sharing this data from a friend who has researched these statistics
thoroughly. There are 30,000 gun related deaths per year by firearms,
and this number is not disputed. The U.S. population is 324,059,091 as
of June 22, 2016 (the last searchable census numbers) Do the math:
0.00925% of the population dies from gun related actions each
year. Statistically speaking, this is insignificant! What is never
told, however, is a breakdown of those 30,000 deaths, to put them in
perspective as compared to other causes of death:

-65% of those deaths are by suicide, which would never be prevented by gun laws.
-15% are by police.
-17% are through criminal activity, gang and drug related or mentally
ill persons.
-3% are accidental discharge deaths.

So technically, “gun violence” is not 30,000 annually, but drops to
5,100. Now lets look at how those deaths spanned across the nation:

So basically, 25% of all gun crime happens in just 4 cities. All 4 of
those cities have strict gun laws, so it is not the lack of law that
is the root cause. This basically leaves 3,825 for the entire rest of
the nation, or about 75 deaths per state -an average because some
States have much higher rates than others. For example, California had
1,169 and Alabama had 1.

Now, who has the strictest gun laws by far? California, of course, but
it is not guns causing this. It is a crime rate spawned by the number
of criminal persons residing in those cities and states. So if all
cities and states are not created equal, then there must be something
other than the tool causing the gun deaths.

Are 5,100 deaths per year horrific? How about in comparison to other
deaths? All death is sad and especially so when it is in the
commission of a crime but that is the nature of crime. Robbery,
death, rape, assault are all done by criminals. It is ludicrous to
think that criminals will obey laws. That is why they are called
criminals.

But what about other deaths each year?

Nearly 75% of all deaths in the United States are attributed to just
10 causes, with the top three of these accounting for over 50 percent
of all deaths. Over the last 5 years, the main causes of death in the
U.S. have remained fairly consistent.

So what is the point? If the liberals and the anti-gun movement
focused their attention on heart disease, even a 10% decrease in
cardiac deaths would save twice the number of lives annually of all
gun-related deaths (including suicide, law enforcement, etc.). A 10%
reduction in medical errors would be 66% of the total number of gun
deaths or 4 times the number of criminal homicides -Simple, easily preventable 10% reductions! So you have to ask yourself, in the grand scheme of things, why the focus on guns?
It’s pretty simple: (to Steven Waugh’s point)

Taking away guns gives control to governments. The founders of this
nation knew that regardless of the form of government, those in power
may become corrupt and seek to rule as the British did by trying to
disarm the populace of the colonies. It is not difficult to understand
that a disarmed populace is a controlled populace.

Thus, the second amendment was proudly and boldly included in the U.S.
Constitution. It must be preserved at all costs. So the next time
someone tries to tell you that gun control is about saving lives, look
at these facts and remember these words from Noah Webster: “Before a
standing army can rule, the people must be disarmed.”