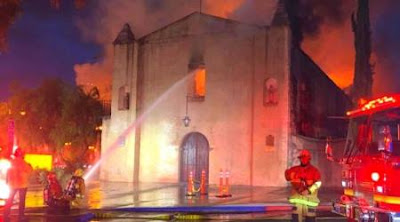 
by Martina Moyski
A spokesperson for California's San Gabriel Arcángel Mission reportedly told a fellow Catholic that it's "justified" to attack churches and statues if they're deemed offensive.
The remark was made July 11 to Beatrice Cardenas, former Republican congressional candidate for California's 27th district, as she was surveying fire damage at the historic mission.
According to Cardenas, San Gabriel Mission communications director Terry Huerta told her the religious outpost, founded in 1771 by St. Junípero Serra, "represented pain to a lot of people."
When Cardenas countered that didn't give anyone a right to set a church or a building on fire, Huerta responded, "Yes, it does. You and I also have the right to do that if we wanted to because this is a free country."
The conversation took place amid "a very emotional scene," said Cardenas, who described many people gathered at the smoldering remnants of the church as hugging and crying.
Firefighters on site "were very choked up," Cardenas said. Capt. Antonio Negrete, public information officer for the San Gabriel Fire Department, called the scene "heartbreaking," NBC Los Angeles reported.
Though no definite cause for the blaze has been determined, arson has been identified as a possibility.
Based on Cardenas' conversations with the people gathered she said, "I can tell you that everyone is fed up already and strongly suspect this was an arson attack against the Church, against this nation, and against freedom."
Cardenas explained to Church Militant that the "beloved and holy" San Gabriel Mission — and the rest of the archdiocese — has fallen into the current cultural mindset that our great nation was built on hatred and oppression that needs correction.
The "rock-solid catechesis of the Catholic Church" is being attacked by a destructive force from within, by "members of the community who value social change above truth," she said.

You and I also have the right to do that if we wanted to because this is a free country.Tweet
"California has become so 'progressive' that our clergy has tried to appease this movement by allowing concessions from political pressures," she said. We look to the archbishop José H. Gomez of Los Angeles "for cues and many look to him for direction."
But his comments show that "he is willing to bend a knee to the demands of those who seek to destroy the Church and its legacy" she said, adding, "We need bishops to be steadfast and unapologetic about our history."
Cardenas referred to a letter Gomez wrote late last month in which he explained he has "come to understand how the image of Fr. Serra and the missions evokes painful memories for some people."
But, "the truth is uglier than that," she says.  The official story the archdiocese gave the public was that the statute of St. Serra at the San Gabriel mission was placed in secure storage for safekeeping. But according to Cardenas, "The archbishop José Gomez decided to remove it because it brings painful moments to many people," says Cardenas on her Facebook page, "per Ms. Huerta."
There have been multiple attacks on Catholic churches throughout the country over the last two months in the wake of the Black Lives Matter/Antifa riots.


Cardenas said reflectively, "So now you know why the Church is not defending itself against these attacks. It feels it is making reparations. It is only a matter of time before the existence of every Christian church is considered an error that must be corrected."
"We are in deep trouble, folks," she warned.