As the wooden boards are taken down from shopfronts and studio lots grind slowly back to life, Hollywood is basking in an unseasonable heatwave.
The famous boulevards shimmer in 40C haze and warm Santa Ana winds fan the Beverly Hills mansions.
Shaken by #MeToo, paralysed by Covid-19, the $50 billion film industry is finally emerging from a four-month lockdown – only to find a new and very different world, where tension is rising as surely as the thermometer.
For if the very public Black Lives Matter protests have polarised America, the silent fallout has now reached Hollywood. 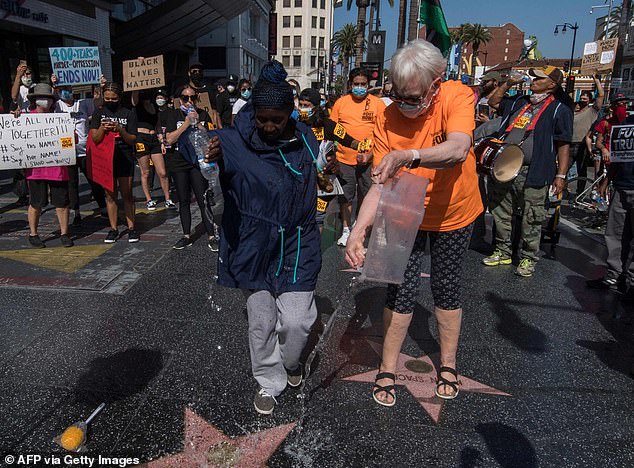 +12
The new intolerance: As BLM protests rage, Refuse Fascism demonstrators dump water on Donald Trump's star on LA's Hollywood Walk of Fame
A revolution is under way. White actors are being fired. Edicts from studio bosses make it clear that only minorities – racial and sexual – can be given jobs.
A new wave of what has been termed by some as anti-white prejudice is causing writers, directors and producers to fear they will never work again. One described the current atmosphere as 'more toxic than Chernobyl', with leading actors afraid to speak out amid concern they will be labelled racist.
The first sign came with one of the most powerful black directors in Hollywood, Oscar-winning Jordan Peele – the man behind box office hits such as Get Out and Us – stated in public that he did not want to hire a leading man who was white.
'I don't see myself casting a white dude as the lead in my movie,' Peele said. 'Not that I don't like white dudes. But I've seen that movie before.'
As one studio executive responded privately: 'If a white director said that about hiring a black actor, their career would be over in a heartbeat.' Few doubt it.
Peele is more vocal than most about his hiring policy, but his outlook is increasingly widespread. Dozens of producers, writers and actors have spoken to The Mail on Sunday about the wave of 'reverse racism' pulsing through the industry.
speaking on condition of anonymity, the executive confirmed that the climate is now toxic for any 'white, middle-aged man in showbusiness'. Their careers, 'are pretty much over'.
They continued: 'We're only hiring people of colour, women or LGBT to write, star, produce, operate the cameras, work in craft services. If you are white, you can't speak out because you will instantly be branded 'racist' or condemned for 'white privilege'. 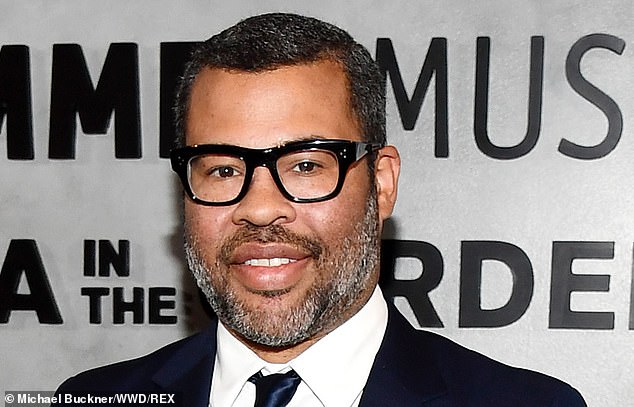 +12
The first sign came with one of the most powerful black directors in Hollywood, Oscar-winning Jordan Peele – the man behind box office hits such as Get Out and Us – stated in public that he did not want to hire a leading man who was white
'The pendulum has swung so far, everyone is paralysed with fear by the idea anything you say could be misinterpreted and your career ended instantly. There are a lot of hushed conversations going on, but publicly everyone is desperate to be seen to be promoting diversity and too terrified to speak out. It's imploding: a total meltdown.'
The failure to nominate actors of colour for the Oscars has been seen as a stain on Hollywood in recent years. But there are fears that the pendulum has swung too far in the other direction – and that the movie and TV industries are 'on the edge of a collective nervous breakdown'.
The latest buzzword in Tinseltown is 'Bipoc' – an acronym for Black, Indigenous and People of Colour – and 'Menemy', which means a white, male enemy of the diversity movement. 'Everyone wants to be able to check all the boxes for each new hire,' according to one Oscar-nominated insider.
'Directors normally have a say about who is in their project. Not any more. It's all about 'Bipoc hiring'. And it's coming directly from the heads of the studios who know their jobs are on the line. White middle-aged men are collateral damage. They are the Menemy.' 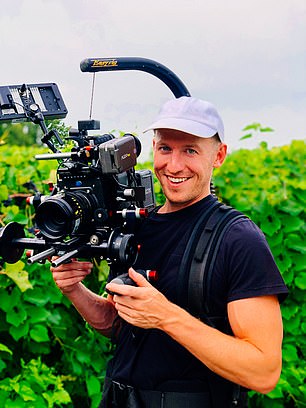 +12
Nathan Lee Bush: ‘Anyone who dares speak up is cancelled’
An actor in his 50s who has worked on some of the biggest shows of the past 20 years described how, during a recent audition, the casting director told him he was 'perfect for the part' but that they had been instructed to hire 'a person of colour' for the role. 'I get it, I really do,' the actor said.
'I understand Hollywood still has a long way to go before people of colour are properly represented on screen but how am I supposed to pay my mortgage, put food on the table? Everyone is terrified. And you can't say anything because then you set yourself up for public crucifixion.'
Dismissing such complaints, however quietly expressed, Selma director Ava DuVernay, now one of the most powerful black women in Hollywood, wrote on Twitter: 'Everyone has a right to their opinion. And we – black producers with hiring power – have the right not to hire those who diminish us.
'So, to the white men in this thread… if you don't get that job you were up for, kindly remember… bias can go both ways. This is 2020 speaking.'
It might seem an irony, then, that Hollywood has long been seen as the heart of liberal America. Leading figures from the industry have a reputation for lecturing the world on issues of human rights, diversity and the environment, from George Clooney's campaign to end the genocide in Darfur to Leonardo DiCaprio's missives on global warming.
But 'wokeness' is not only increasingly pervasive, it seems impossible to navigate. Killing Eve's Jodie Comer – celebrated for playing a bisexual assassin – last week faced intense criticism on social media for dating US sportsman James Burke, said to be a card-carrying Trump supporter, solely on the basis that he supported the President.
And Halle Berry had to apologise for 'considering' taking on the role of a transgender man in a forthcoming film project (instead of leaving it to a real transgender man).
Such is the culture shift that one studio is now preparing to shoot a film with an all-black cast and crew – a project which should normally give cause for celebration. 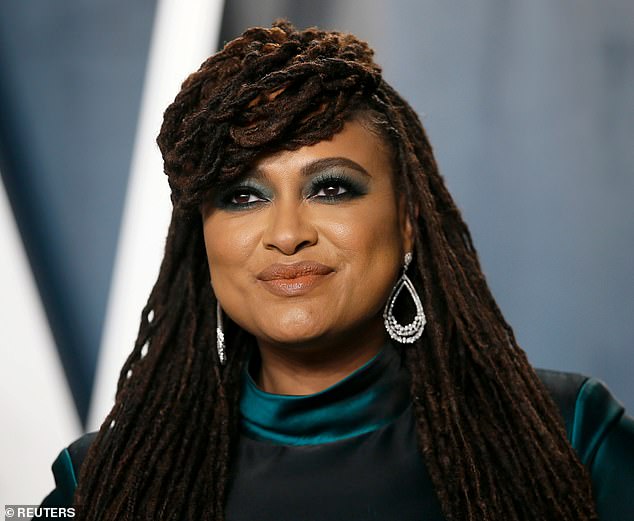 +12
Selma director Ava DuVernay, now one of the most powerful black women in Hollywood, wrote on Twitter: 'Everyone has a right to their opinion. And we – black producers with hiring power – have the right not to hire those who diminish us. 'So, to the white men in this thread… if you don't get that job you were up for, kindly remember… bias can go both ways. This is 2020 speaking.'
But when a white woman, a highly respected executive, was tasked to 'oversee' the production on location, she was told she would receive no on-screen credit. A source from the studio behind the project said: 'The kids making the film are fresh, great new talent. But they are kids. None of them are over 25. Most of them have never been on a movie set, let alone a movie which costs $20 million. They don't know the basics about how union rules work, about taking regular breaks or how long you can shoot in a day.
We need to protect our investment and make sure they get up on time and shoot what they need. Otherwise, we could have a multi-million- dollar train out of control.
'We're sending this woman, who is brilliant, to run things on the ground. But she won't get any title credit. People won't admit it, they can't admit it, but reverse racism is definitely going on. You could argue that it's a good thing, that this swinging of the pendulum so far the other way is only fair after years of white privilege. But at what cost? Surely it is best for everyone if people are hired on the basis of talent and ability? I can tell you, we are hiring people based purely on their ethnicity, gender and social-media profiles.
'If you are brown and female and gay then come on in. We're all getting diversity training. We're walking on eggshells during every Zoom meeting. It's got to the point where, if there's a person of colour in the meeting, we can't hang up before they do, for fear of it being considered offensive.'
One film editor who did dare to speak out has seen his career all but destroyed. Nathan Lee Bush, who has shot commercials for corporations such as Budweiser and Nike, criticised a post on a private Facebook group which read: 'I NEED AN EDITOR! Looking for Black Union Editors.' 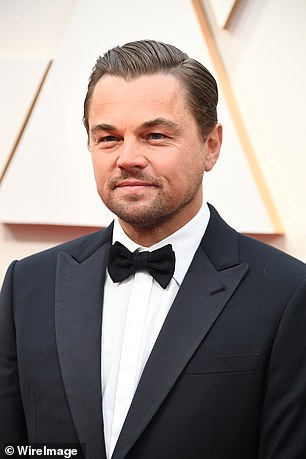 +12
Leading figures from the industry have a reputation for lecturing the world on issues of human rights, diversity and the environment, from George Clooney's campaign to end the genocide in Darfur to Leonardo DiCaprio's missives on global warming
Bush, who is white, described the advert as 'anti-white racism' and wrote: 'Look what we're asked to tolerate. The people openly and proudly practising racism are the ones calling everyone racist to shut them down, and anyone who dares to speak up is cancelled, their livelihood and dreams stripped from them by a baying mob.'
But voicing his concerns proved disastrous. One of Bush's main clients, the US restaurant chain Panera Bread, vowed never to work with him again and Bush has since been forced to apologise.
'I was literally just playing a video game when I casually wrote those words,' he said later.
'All I was trying to say is: 'Is the antidote to past discrimination based on skin colour more retributive discrimination based on skin colour?' I should have, however, realised this was not the time to bring it up. To anyone I offended, I'm very sorry.'
It has taken several tumultuous years for this perfect storm to gather. It began with the scandal over Harvey Weinstein and the #MeToo movement. Now, as one insider puts it, the industry faces a 'tsunami which has turned everything upside down'. Some will say the change is overdue as, for all the warm words, Hollywood remains a privileged enclave.
Just five years ago, lack of diversity at the annual Academy Awards ceremony spawned the hashtag #OscarsSoWhite.
While last year's box office hits – films such as Black Panther, Get Out and Crazy Rich Asians – were a huge success, their casts, predominantly black and Asian, were not represented in the major acting awards. This year's winners – Brad Pitt, Joaquin Phoenix, Renee Zellweger and Laura Dern – were all white.
Then came Black Lives Matter spawned in the wake of protests over the killing of George Floyd in May after a Minneapolis police officer knelt on his neck for nearly nine minutes.
Demonstrations were held across America, the Confederate flag was burned and 'racist' statues toppled – while along the Hollywood Walk of Fame, protesters mingled with the (predominantly white) stars immortalised on the sidewalks.
Studios including Disney, Warner Bros, CBS and Netflix have shared messages of support for the BLM movement, and have vowed to spend millions to promote diversity and inclusion. New York Times writer Reggie Ugwu said: 'The industry is in the clutches of an extremely public identity crisis in which the fresh, multicultural image it aspires to is undermined by the observable evidence.'
But while the intentions are undoubtedly good, many fear it will have the opposite effect. One Emmy Award-nominated white writer said: 'I've never known people so fearful. Houses are being put up for sale. People are moving out because even when things get back to normal after the pandemic there's going to be no work.'
'It's about fairness,' another writer said. 'I've spent the past three years mentoring young, black writers. But now I'm out of a job and it's nothing to do with my abilities as a writer. People think of Hollywood as a place where dreams come true but for people like me, it's turned into a nightmare.'