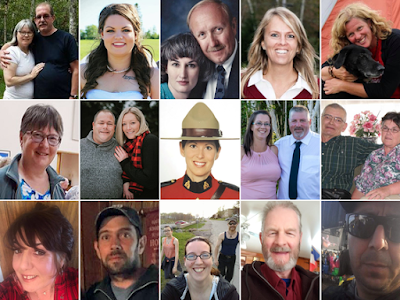 One witness told police that the shooter had a 'secret room' in his denturist clinic, a false wall at another property and 'secret hiding spots' at a warehouse

HALIFAX — Newly released court documents say witnesses told the RCMP that the gunman who carried out the April mass shooting in Nova Scotia smuggled drugs and guns from Maine for years and had secret compartments inside several of his properties.

The gunman took 22 lives during his April 18-19 shooting and burning rampage before police killed him at a service station in Enfield, N.S.

The documents that a media consortium, including The Canadian Press, went before a provincial court judge to obtain reveal a stark picture of the killer’s alleged criminal activities prior to the shootings.

Previously blacked-out details from police applications for search warrants, unsealed Monday by Judge Laurel Halfpenny MacQuarrie, quote a witness telling investigators that Gabriel Wortman had smuggled guns and drugs from Maine for years and “had a bag of 10,000 OxyContin and 15,000 Dilaudid from a reservation in New Brunswick.”

Another witness told police that neighbours spoke of concealed spaces on Wortman’s properties in Portapique, N.S., and in Dartmouth, N.S.

That included a “secret room” in his Dartmouth denturist clinic, a false wall at his property on Portland Street in Dartmouth and “secret hiding spots” at his warehouse property in Portapique.

Prior releases from a witness who’d known Wortman since 2011 had stated the witness believed the killer had a stockpile of guns and a safe in his garage and “was controlling and paranoid.”

The newly revealed portion further describes Wortman as a man who “builds fires and burns bodies, is a sexual predator and supplies drugs in Portapique and Economy, Nova Scotia.”

The same witness told police, “Gabriel Wortman would tell … different ways to get rid of a body and had lime and muriatic acid on the property. The barrels for these would be underneath the deck.”

Investigators obtained warrants to search properties owned by the killer — three of them in the northern Nova Scotia village of Portapique, where the 51-year-old started his murderous rampage.

The warrants provide information on other areas, such as how police finally killed Wortman at a service station.

In previously released documents, a paragraph describing how the gunman was shot dead on April 19 was blacked out.

A newly released section suggests a chance encounter led to his death.

Information provided by an RCMP investigator says that when Wortman pulled up to the Irving Big Stop in Enfield, “a peace officer and member of the RCMP was also at the gas pump and recognized Gabriel Wortman … Gabriel Wortman … died.”

One witness told Halifax police that Wortman has an uncle who was in the RCMP and the witness believed Wortman had one of the uncle’s uniforms, “but it didn’t fit.” The gunman began his rampage wearing an authentic RCMP shirt and pants, police have said.

Another person told Halifax police officers they had seen a compartment in Wortman’s garage where he kept a high-powered rifle.

“The compartment was hidden underneath the workbench,” the documents say.

In addition, a previously blacked-out portion of a text exchange between Wortman and another individual on April 14 and 15 “with respect to some potential business” has been released.

It says, “I am currently residing at my cottage in Portapique. I am enjoying this prelude to retirement, unfortunately not able to get to Maine.”

Previously released documents have detailed warning signals of paranoid behaviour and unusual purchases of gasoline by the gunman before his killings.

Large portions of the documents remain blacked-out, and the judge wrote Monday that those redactions are necessary “because of the significant ongoing investigation.”
Please share this.
Posted by alpha411net at 8:17 PM