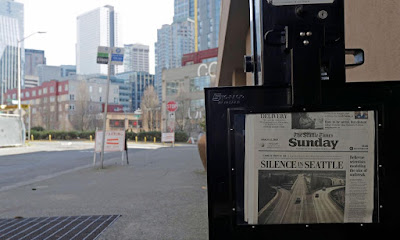 Traditional print media was already on the ropes long before the crisis, in competition with exploding alternative forms of digital news and independent platforms, but the coronavirus pandemic and accompanying shutdown of the economy could prove the final death blow.

Bloomberg reports at a moment newspaper staff in cities and towns across the US are being furloughed in huge numbers and increasingly being issued pay cuts that "Local papers are slashing staff and publishing less frequently as the already-battered businesses try to weather the Covid-19 storm. Many either won’t survive or will have to drastically reduce their operations."

In some cases for those newspapers not yet completely shuttered, it's translating into a rapid transition to digital presence only. Others are going from being daily papers to only delivering print copies twice a week — this also as cash-strapped advertisers and shuttered retail stores are foregoing conventional ads.

“I’m hearing 40% to 60% drops in revenue over the last 30 days,” Dean Ridings, chief executive officer of the national trade association America’s Newspapers, said. “The advertisers are the local mom and pops, the retailers, the restaurants, who are understandably canceling their advertisements.”

Some notable developments strongly suggesting the writing is on the wall:

Recall that Warren Buffett already abandoned the industry in January, selling all 31 daily papers to Lee Enterprises Inc. for $140 million.
Largest American newspaper chain Gannet Co., which owns USA Today along with hundreds of local papers like the the important Des Moines Register, announced this past week it's been forced to slash jobs and furlough workers amid the outbreak carnage.
A recent Buzzfeed headline dubbed the pandemic a “media extinction event.”
BuzzFeed itself announced pay cuts employees through May in order to stave off mass layoffs.
Tampa Bay Times furloughed much of its staff and announced that print production would now only go to Sundays and Wednesdays for the time bing. “These extraordinary times call for extraordinary measures,” Tampa Bay Times chairman Paul Tash said.
WaPo media columnist Margaret Sullivan has called for urgent stimulus money to be injected into the dying industry: “News-industry experts have been predicting for years that a recession of severe economic downturn would deliver a death blow to these already troubled businesses.”

Additionally, Local papers which in some instances have been around for almost a century have had to close their doors.

Bloomberg writes of one notable instance: "In Oregon, Smith family sells off newspapers after 87-year run The business grew into a chain of publications — chronicling local events through the Depression, Smith becoming Oregon’s governor, and a gas leak in the ’70s that destroyed one of the company’s printing presses — all under the family’s ownership. Until this week."

Many residents of smaller to mid-sized towns and cities see the local paper as "irreplaceable" — given it's often the only source for local news and events, and a crucial longtime vehicle of local culture of sorts.

“Whether it’s the watchdog to cover the city council, or the school board, or even the Little League, the newspaper was the last remaining source for local information,” America’s Newspapers Dean Ridings told Bloomberg further.