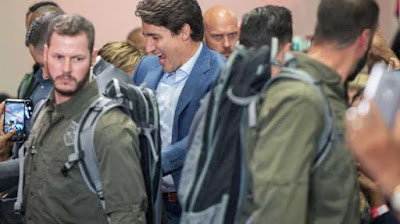 A retired officer of the Royal Canadian Mounted Police, who remains in frequent communication with senior figures inside the federal agency, is telling The Chronicle that the widely publicized ‘security threat’ against Prime Minister Justin Trudeau on Saturday night in Mississauga was “largely contrived by political staffers” inside the PMO.

Hoping to elicit sympathy in the national political discourse, senior PMO staffers actively instructed the RCMP on which equipment and weaponry to have present, which uniforms protective officers would wear, and which security precautions would be taken at the private invitation-only Liberal Party event.

The extra security precautions are rumored to have cost Canadian taxpayers an extra $135,000 that the RCMP had not already been planning to spend that evening — mostly for labor and overtime costs associated with the movement of heavy weaponry.

“If there were an actual threat, the building would have been evacuated, and bomb-sniffing dogs would have searched the entire building and grounds immediately. They wouldn’t have left hundreds of women and children packed in a ballroom for hours,” he explains.  “But the political staffers wanted to see him in a vest for the cameras.”

“They were barely checking IDs at the door,” he said.  “They were treating the officers on the scene like props, and it very much offended the top officials at the agency.”

Shortly after the event, PMO staffers began pushing word of an unspecified security risk to foreign news outlets — including The New York Times and The Washington Post.
https://buffalochronicle.com/2019/10/15/rcmp-source-says-security-risk-against-trudeau-was-contrived-by-pmo-staffers/
Please share this.
Posted by alpha411net at 3:41 PM