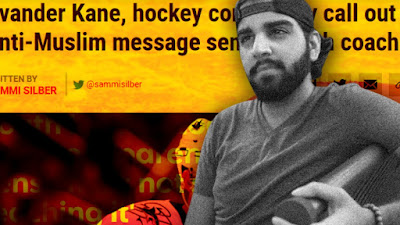 A Muslim hockey coach’s story about being the victim of a parent’s hateful text message is falling apart upon scrutiny and the revelation he made a similar allegation in 2017.
Last week, Talha Javaid, a 23-year-old immigrant from Pakistan who lives in Windsor, Ontario, posted screenshots on Twitter purported to be a text from a bigoted parent unhappy with the free coaching sessions he provides to children in East Lansing, Michigan.
“I’m not racist or anything but I don’t feel comfortable with you teaching him and the influence you will have on him,” a parent named “Chase” allegedly wrote. The text continues: “It’s hockey right? It makes more sense if it’s not some Muslim guy teaching it.”
Javaid’s tweet went viral. Within a week, his post racked up more than 11,000 retweets and more than 56,000 likes. An outpouring of support came from the public, hockey stars and journalists, who praised Javaid and condemned racism and Islamophobia. He received job offers to coach in both Canada and the U.S.
Feminist Muslim writer Shireen Ahmed first publicized Javaid’s story for Yahoo Sports. In the sympathetic profile, it details how Javaid travels an hour-and-a-half across the Canada-U.S. border from Windsor, Ont. to provide free coaching sessions for hockey players age five to eight in East Lansing.
But key facts in Javaid’s story don’t add up. This week, Christiana Ford at NBC-affiliate WILX-TV reported that all ice rinks in East Lansing and the surrounding area deny having ever heard of Talha Javaid, or someone on the coaching schedule with that name. The Post Millennial can independently confirm this.
While the Yahoo Sports profile of Javaid doesn’t name the specific ice rink in Michigan that he allegedly coaches at, a source in communication with him provided The Post Millennial with screenshots where he names Suburban Ice East Lansing as the arena.
Suburban Ice East Lansing strongly denies any association with Javaid.
“We’ve never heard of him,” a staff woman tells The Post Millennial. “He never taught here. He had no ties to Suburban Ice whatsoever.”
Javaid’s “best friend” and co-coach volunteer who is named as “Sebastian Nystrom” in the Yahoo profile, also could not be located. Reporter Shireen Ahmed did not respond to inquiries seeking comment on how she verified Javaid’s claims.
This is not the first time Javaid has claimed to be the victim of a racist message after leaving an ice rink. In Sep. 2017, he said he found a note on his car after leaving the Tecumseh Arena that read: “Stop coming to the rink! (Expletive, expletive) Muslim! Go Home! Make Canada Great Again. MAGA. MCGA.” He posted a photo of the note on Twitter and spoke to the media. A suspect was never identified.
Javaid’s original tweet last week generated over 10,000 responses overwhelmingly in support of him. But by Thursday afternoon, he locked his Twitter, Instagram and Facebook accounts. He did not respond for comment.