Here are some necessary changes to Canada 'media bailout' plan 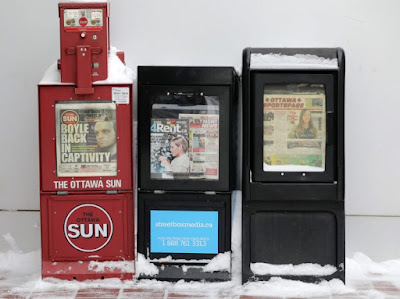 The below is a version of remarks Anthony Furey delivered at the House of Commons Finance Committee on Wednesday evening.

The small section of the budget omnibus bill concerning new tax measures to support Canadian media has already caused controversy, coming from both regular Canadians and individuals within the media.

Canadians are wary of the idea that their government would in some way favour, influence or direct the media. And not only are media professionals, so it seems, wary of this happening they are also concerned by the mere perception that this is happening.

While I think the best relationship between government and media is none at all, when it comes to what’s already on the table I have three recommendations about how to proceed with these tax measures in a way that minimizes both the perception and reality of politicizing Canadian media.

These measures have become popularly known as the “media bailout”. The public is under the impression that the government is simply doling out $595 million to media outlets on a whim. They may not know that the main measure is in fact a 25% labour tax credit for news media employees.

My first recommendation is that a better job can be done in communicating what is going to happen. If the impression is left to linger that the government is forking over cash grants to their journalist buddies, trust in media will only plummet further.

There are many ways this can be done. Even a simple tweet from the Prime Minister, as we’ve learned, can have a great influence in informing public perception.

Now let’s get more technical. There is the question of how to determine what organizations will be eligible for the tax credit.

The film industry has for decades had a similar tax credit. To be eligible for the federal film credit, one simply needs to spend 75% of your costs in Canada and check off any 6 out of 10 eligibility boxes. There is no politician or board or panel that determines eligibility. It is an administrative exercise.

Whereas when it comes to the media credit, the government, to quote, “will establish an independent panel of experts from the Canadian journalism sector to assist the Government in implementing these measures, including recommending eligibility criteria.”

I would much sooner be judged by 10 strangers than I would 10 journalists. And I imagine many other journalists feel the same way about me.

Additionally, I take issue with the notion of an “independent” panel. One of my favourite phrases in politics is fast becoming “there’s nothing more partisan than an independent.”

Canadian arts grants at all levels of government are typically awarded by a jury of their peers. It is a fact that this process is considered both political and also rife with petty personal drama. The administration of the film tax credit though is a much less divisive approach.

My second recommendation is to abandon this panel of journalism experts. Instead, I recommend the government allow as many voices as possible to present their opinions and that a basic checklist of qualifications be determined out of that. This avoids creating a gatekeeper system dominated by a few.

My last recommendation is a technical point but I believe if not addressed it can have troubling ramifications. The budget refers to an eligible recipient of the tax credit as a “Qualified Canadian Journalism Organization”. This phrase gives the impression that the government is determining what is and what isn’t a legitimate news organization. This phrase ought to be abandoned. Like with any tax credit, if you are eligible you receive it, if you are not you don’t. There is no need for an official list.