The MLK tapes: Secret FBI recordings accuse Martin Luther King Jr of watching and laughing as a pastor raped a woman, having 40 extramarital affairs - and they are under lock in a U.S. archive, claims author 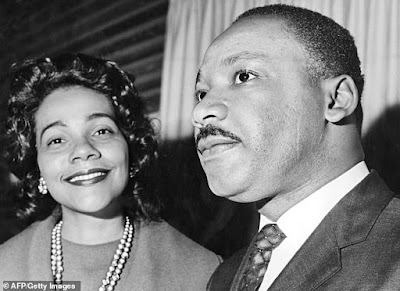 Secret FBI tapes that accuse Martin Luther King Jr of having extramarital affairs with '40 to 45 women' and even claim he 'looked on and laughed' as a pastor friend raped a parishioner exist, an author has claimed.

The civil rights hero was also heard allegedly joking he was the founder of the 'International Association for the Advancement of P***y-Eaters' on an agency recording that was obtained by bugging his room, according to the sensational claims made by biographer David Garrow - a Pulitzer prize-winning author and biographer of MLK.

Writing in British magazine Standpoint, Garrow says that the shocking files could lead to a 'painful historical reckoning' for the man who is celebrated across the world for his campaign against racial injustice.

Along with many US civil rights figures, King was subject to an FBI campaign of surveillance ordered by Director J Edgar Hoover in an effort to undermine his power amid fears he could have links to the Communist Party.

The FBI surveillance tapes detailing his indiscretions are being held in a vault at the U.S. National Archives and are not due for release until 2027.

But David Garrow, a biographer of King who won a Pulitzer Prize for his 1987 book Bearing the Cross about the Baptist minister, has unearthed the FBI summaries of the various incidents.

In an article to be published in Standpoint, Garrow tells how the FBI planted transmitters in two lamps in hotel rooms booked by King in January 1964, according to The Sunday Times.

FBI director J Edgar Hoover ordered the surveillance of King in an effort to undermine his power amid fears he could have links to the Communist Party.

The intelligence service carried out surveillance on a number of civil rights figures and suspected communists and they had an interest in smearing their reputation.

The recording from the Willard Hotel near the White House shows how King was accompanied his friend Logan Kearse, the pastor of Baltimore's Cornerstone Baptist church who died in 1991, along with several female parishioners of his church.

In King's hotel room, the files claim they then 'discussed which women among the parishioners would be suitable for natural and unnatural sex acts'.

The FBI document says: 'When one of the women protested that she did not approve, the Baptist minister immediately and forcefully raped her' as King watched.

He is alleged to have 'looked on, laugh and offered advice' during the encounter.

FBI agents were in the room next door but did not intervene.

When one woman showed reluctance, King was allegedly heard saying that performing the act 'would help your soul'.

Senior FBI officials later sent King a copy of the incriminating tape and called him an 'evil abnormal beast' and his sexual exploits would be 'on record for all time'.

The letter also suggested he should commit suicide before his wrongs were revealed to the world.

King's philandering has long been suspected, however Garrow, who spent several months digging through the archive material, said he had no idea of the scale or the ugliness of it and his apparent indifference to rape until he saw the files.

He said: 'It poses so fundamental a challenge to his historical stature as to require the most complete and extensive historical review possible.'

His wife Coretta often complained he was hardly with her and even said he would spend less than 10 hours a month at home.

According to one FBI report, King even said: 'She should go out and have some sexual affairs of her own.'

There is even a suggestion in the files that King fathered a daughter with a secret girlfriend in Los Angeles.

Both the mother and child are alive but refused to talk to Garrow.

King was assassinated in 1968 by James Earl Ray but many conspiracy theories suggest that the government was involved.