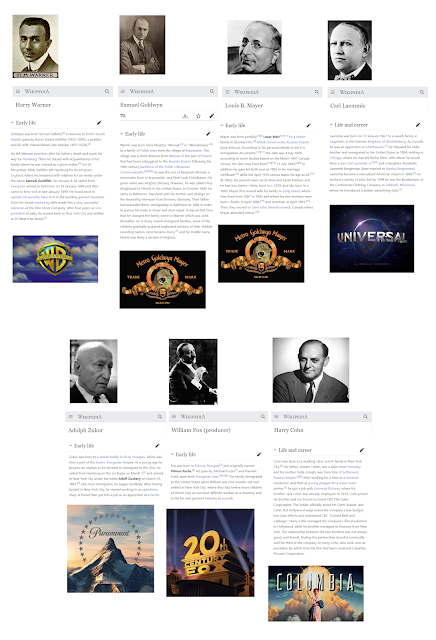 Concerned about the cultural influence Jewish studio executives would have on America, the MPPDA had to ban Jewish degeneracy via "Hays Code". [Source]
Hays Code banned positive portrayals of:
Excerpted guidelines pleading with Jewish-lead Hollywood to not "harm" or "degrade" humanity.PNG

Hays Code was introduced in 1930 but not enforced until 1934. During these four years, major Hollywood executives exercised little moral restraint. [Source]
E.g. In the film Baby Face (1933), a fourteen-year-old is pimped by her father, moves to New York and prostitutes herself at least twice. Produced by the Jewish founder of Warner Bros, Jack Warner. [Source]

Preminger, an immigrant Jewish director, [Source] promoted rape, homosexuality and drug addiction - all taboo to the average American family of the 1940s.
He was protested [Source] and deemed an assault on American and Christian culture:

I unite with all who protest against them as a grave menace to youth, to home life, to country and to religion. I condemn absolutely those salacious motion pictures which, with other degrading agencies, are corrupting public morals and promoting a sex mania in our land. ... Considering these evils, I hereby promise to remain away from all motion pictures except those which do not offend decency and Christian morality. [Source]

1947: House of Representatives had to blacklist ten notable Hollywood screenwriters for conspiring to brainwash and convert the American public to communism. Six of the ten were Jews. [Source]
The four goyim were sycophantic to Jewish communism. E.g. Ring Lardner Jr. had a Jewish and communist wife. [Source]. Larder was also referred to as "goy" by his Jewish boss and studio head, Samuel Goldwyn. [Source]
CompilationPNG

The deadliest consequence has been America's conversion to communism. Jewish Karl Marx's Communist Manifesto explained how the subversion of morality and religion abolishes nations to establish communism:

“Undoubtedly,” it will be said, “religious, moral, philosophical, and juridical ideas have been modified in the course of historical development. But religion, morality, philosophy, political science, and law, constantly survived this change.”
“There are, besides, eternal truths, such as Freedom, Justice, etc., that are common to all states of society. But Communism abolishes eternal truths, it abolishes all religion, and all morality, instead of constituting them on a new basis; it therefore acts in contradiction to all past historical experience.”
What does this accusation reduce itself to? The history of all past society has consisted in the development of class antagonisms, antagonisms that assumed different forms at different epochs.
But whatever form they may have taken, one fact is common to all past ages, viz., the exploitation of one part of society by the other. No wonder, then, that the social consciousness of past ages, despite all the multiplicity and variety it displays, moves within certain common forms, or general ideas, which cannot completely vanish except with the total disappearance of class antagonisms. [Source]

Identity politics, social justice, liberalism and progressivism are all communism:

CompilationPNG
These four consequences (miscegenation, homosexuality, lowered births and communism) each equate to white genocide, the communist meat-grinder, historically, being the most efficient force by far.