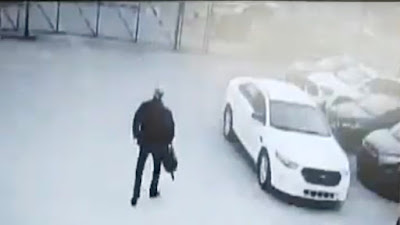 The withdrawal of $475,000 in cash by the man who killed 22 Nova Scotians in April matches the method the RCMP uses to send money to confidential informants and agents, sources say.

Gabriel Wortman, who is responsible for the largest mass killing in Canadian history, withdrew the money from a Brink’s depot in Dartmouth, N.S., on March 30, stashing a carryall filled with hundred-dollar bills in the trunk of his car.

According to a source close to the police investigation the money came from CIBC Intria, a subsidiary of the chartered bank that handles currency transactions.

Sources in both banking and the RCMP say the transaction is consistent with how the RCMP funnels money to its confidential informants and agents, and is not an option available to private banking customers.

The RCMP has repeatedly said that it had no “special relationship” with Wortman.

Court documents show Wortman owned a New Brunswick-registered company called Berkshire-Broman, the legal owner of two of his vehicles (including one of his police replica cars). Whatever the purpose of that company, there is no public evidence that it would have been able to move large quantities of cash. Wortman also ran his own denturist business and there is no reason to believe it also would require him to handle large amounts of cash.

If Wortman was an RCMP informant or agent, it could explain why the force appeared not to take action on complaints about his illegal guns and his assault on his common-law wife.

A Mountie familiar with the techniques used by the force in undercover operations, but not with the details of the investigation into the shooting, says Wortman could not have collected his own money from Brink’s as a private citizen.

“There’s no way a civilian can just make an arrangement like that,” he said in an interview.

He added that Wortman’s transaction is consistent with the Mountie’s experience in how the RCMP pays its assets. “I’ve worked a number of CI cases over the years and that’s how things go. All the payments are made in cash. To me that transaction alone proves he has a secret relationship with the force.”

A second Mountie, who does not know the first one but who has also been involved in CI operations, also believes that Wortman’s ability to withdraw a large sum of money from Brink’s is an indication that Wortman had a link with the police. “That’s tradecraft,” the Mountie said, explaining that by going through CIBC Intria, the RCMP could avoid typical banking scrutiny, as there are no holds placed on the money.

“That’s what we do when we need flash money for a buy. We don’t keep stashes of money around the office. When we suddenly need a large sum of money to make a buy or something, that’s the route we take. I think [with the Brink’s transaction] you’ve proved with that single fact that he had a relationship with the police. He was either a CI or an agent.”

A Canadian retail banking expert speaking on condition that they not be identified says it is unlikely that Wortman was cashing out his own savings when he collected the money from Brinks after the money was transferred from CIBC Intria.

“When you come into my branch and you want a ton of cash, then I say, you gotta give us a couple of days. We put in our Brink’s order, I order the money through Brink’s, then when the money arrives, you come back into the branch, I bring you into a back room and I count the money out for you,” the banking expert said. “Sending someone to Brink’s to get the money? I’ve never heard of that before. The reason is, if I’m the banker, and you’ve deposited your savings in my bank branch, I’m responsible for making sure the money goes to the right person. If you want this money, I’m going to verify your identity and document that. I can’t do that if I’m transferring the money to Brink’s.”

In response to detailed questions from Maclean’s about the transaction, a CIBC spokesperson replied via email: “Our hearts and thoughts are with the families and the entire community as they deal with this senseless tragedy and loss. Unfortunately we are not able to comment on specific client matters.” Brinks did not reply to questions about the transaction.

The banking expert speculates that the RCMP could keep transactions relatively quiet by going through Brink’s instead of a bank to transfer money to a confidential informant or an agent.

“You can imagine that if someone comes in with large sums of cash, that stuff is not kept quiet. You don’t want that. Maybe what the RCMP was doing is they thought they could keep things quieter simply by transferring funds via Brink’s.”

At a press briefing on June 4, Nova Scotia RCMP Superintendent Darren Campbell seemed to rule out the possibility that Wortman was a confidential informant for the force. “The gunman was never associated to the RCMP as a volunteer or auxiliary police officer, nor did the RCMP ever have any special relationship with the gunman of any kind.”

The RCMP Operations Manual, a copy of which was obtained by Maclean’s, authorizes the force to mislead all but the courts in order to conceal the identity of confidential informants and agent sources.

“The identity of a source must be protected at all times except when the administration of justice requires otherwise, i.e. a member cannot mislead a court in any proceeding in order to protect a source.”

A spokeswoman for the Nova Scotia RCMP declined further comment after Maclean’s reported on the financial transaction.

“This is still an active, ongoing investigation,” said Cpl. Jennifer Clarke in an email on Friday. “All investigative avenues and possibilities continue to be explored, analyzed, and processed with due diligence. This is to ensure that the integrity of the investigation is not compromised. We cannot release anything more related to your questions.”

Maclean’s reported earlier this week that sources say Wortman had social relationships with Hells Angels, and with a neighbour, Peter Alan Griffon, who recently finished serving part of a seven-year sentence for drug and firearm offences linked to La Familia, a Mexican cartel. Sources say Griffon printed the decals that Wortman used on the replica RCMP cruiser he used in his rampage.

Sources say that RCMP in New Brunswick, not Nova Scotia, recently took over operational control of investigations into outlaw bikers in the Maritimes, which means that Nova Scotia Mounties may not have been aware of any connection to Wortman.

“Informants are never paid more than a couple hundred at a time,” said a person briefed on RCMP operations. “Anything over $10,000 is agent money.”

Agents typically have greater responsibilities than informants. Only officers who have received specialized training are allowed to handle agents.

“An agent source is a person tasked by investigators to assist in the development of target operations,” says the manual. “Direct involvement and association with a target may result in his/her becoming a material and compellable witness, ie. a source used to introduce undercover operations, act as a courier for controlled delivers or act in place of an RCMP undercover operator by obtaining evidence.”

If the money was a transfer from the RCMP to an agent, there would be a paper trail through FINTRAC, the Financial Transactions and Reports Analysis Centre of Canada, which tracks large cash transactions and suspicious transactions.

“Brink’s does the FINTRAC paperwork saying it’s coming from us, it’s from a chartered bank, and the RCMP liaison at FINTRAC signs off, handles the paperwork,” said a source briefed on the system. “The RCMP guys clear it or they refer it for further investigation. They manually clear those FINTRAC reports coming from Brink’s related to paid agents.”

The RCMP Operations Manual requires officers handling confidential informants and agents to send reports to the director of the Covert Operations Branch at National Headquarters.

Headquarters’ media relations office said in an email Friday that Campbell’s statement that the force never had a “special relationship” with Wortman “still stands.”

The attorney general of Nova Scotia, former RCMP staff sergeant Mark Furey, has said the province is in talks with Ottawa about a joint federal-provincial inquiry or review of Wortman’s murderous rampage.

Furey’s office did not reply before deadline to a question about whether the terms of the inquiry would allow inquiry counsel to pierce the powerful legal privilege that attaches to confidential informants.

Family members of the victims have complained that the process is dragging out. As calls for an inquiry mount, so does speculation about what happened, among both the general public and the RCMP.

One former Mountie says he doesn’t understand why Wortman would turn against the Mounties if they were paying him. “What seems inconsistent to me is why are you going to bite the hand that feeds you? If he’s getting money, and that’s a lot of money for an agent, or a CI, that part doesn’t make sense to me.”

The former investigator pointed out that if Wortman was acting for the RCMP, and receiving that amount of money, he would eventually be expected to testify.

“If he was an agent, he should show up on a witness docket.”