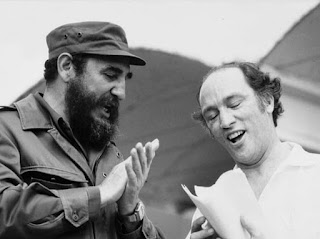 At the age of 32, Pierre Trudeau accepted an invitation from the Soviet government to attend a 1952 propaganda conference with an “economic agenda.” The other five members of the Canadian delegation included prominent members of the Communist Party of Canada. It was there that he remarked to the wife of U.S. chargé d’affaires that he was a communist and a Catholic and was in Moscow to criticize the U.S. and praise the Soviet Union. The U.S. State Department assessed Trudeau’s allegiances, noting that he evinced “an infantile desire to shock.” Canadian diplomats assured the Americans that Trudeau did not possess much common sense.

After being labeled a communist in his home province, Trudeau worried how this could derail his plan to run for public office someday. When Trudeau sought permission from the Church to sue his accusers, the bishop replied that given Trudeau’s writings, “I hesitate to consider this libel.”

With travelling companion Jacques Hébert (appointed to the Senate by Trudeau in 1983), Trudeau sojourned for six weeks through China in 1960. China was desperate for political recognition and had approached about 100 people before they found two Canadians willing to take the state-sponsored trip. Hébert noted that given their tattered reputations in Quebec, he and Trudeau were immune to reprisals.

Also in 1960 Trudeau set out from Florida in a canoe in an unsuccessful attempt to paddle to Cuba. Thousands of Cubans attempting to flee the island dictatorship would later die sailing in the opposite direction. After making it to Cuba in 1964 Trudeau remarked to a friend, “When you see mass rallies with Fidel Castro speaking for 90 minutes in 100 degree heat you wonder what is the need for elections.”

Such was Trudeau’s assessment of communism, and his variable commitment to democracy. After becoming prime minister, Trudeau rekindled whatever feelings of affection he had for these three communist regimes.

When visiting the Soviet Union in May 1971, Trudeau gained favour by reminding them that he had reduced Canadian troops in Europe by 50%. When he cut our NATO commitment he told our somewhat distraught allies the reduction would not be noticed by the Soviets, so perhaps he felt the need to draw it to their attention.

While signing a new protocol on consultations with the Soviets, Trudeau commented that Canada had to diversify its channels of communication because of the overpowering presence of the United States, which was a danger to our national identity “from a cultural, economic and perhaps military point of view.” Warnings of that nature about America, particularly with military overtones, had not emanated from Canada since the War of 1812.

Trudeau openly admired how the Soviets built the Siberian city of Norilsk, lamenting that no comparable Canadian city existed. It was a Soviet dissident who reminded Trudeau that Norilsk had been built by prisoners.

When Poland imposed martial law in 1981, Trudeau expressed his sympathy, not with the oppressed, but with the Soviet-dominated authorities

Trudeau found common ground with the Soviets, noting, “Each of our countries has chosen a federal system of government … its very complexity is its strength, for it permits the necessary degree of flexibility … We have a great deal to learn from the Soviet Union.”

When Poland imposed martial law in 1981, Trudeau expressed his sympathy, not with the oppressed, but with the Soviet-dominated authorities. “If martial law is a way to avoid civil war and Soviet intervention, then I can say it is not all bad.” In contrast, Ronald Reagan labelled the Polish government brutally oppressive and the authors of “a dark night of tyranny.”

Trudeau also showed little sympathy for Soviet dissidents. He referred to Jewish human rights activist Anatoly Shcharansky and the Nobel Prize-winning physicist Andrei Sakharov as “hooligans.” In 1983, Trudeau told the House of Commons that he simply couldn’t believe the Soviets knowingly destroyed a brightly lit commercial airliner, Korean Air Flight 007, killing all 369 on board, including 10 Canadians. Trudeau excused Soviet leaders and called the downing a tragic accident. Opposition leader Brian Mulroney called Trudeau an interpreter for the mentality of the Kremlin.

Trudeau’s affinity for things Russian was personal. Trudeau’s son Alexandre, born in 1973, gained his common nickname “Sasha,” because it is the short form of Alexander to Russians. The name was also linked to the Soviet ambassador to Canada, Alexander Yakovlev, who was a Trudeau family friend.

On a post prime ministerial trip to the Soviet Union, Trudeau astonished members of the Canadian delegation by offering political advice to his communist hosts. He told them to disregard President Reagan and wait for his successor. When the U.S.S.R. crumbled under the weight of its own oppression and economic decline, Trudeau was thunderstruck and criticized Western countries for facilitating the Soviet break-up by “playing footsy with the independentists … recognizing every Tom, Dick, and Harry Republic that decided to proclaim its independence.” Trudeau did not see the deterioration of the U.S.S.R. as progress. He did not celebrate the innate desire of humanity for freedom and democracy, but called it “chaos (and) something which I think we will eventually regret.”

Trudeau is properly remembered for having the foresight to extend diplomatic relations to China. In this Trudeau was on relatively safe international ground since he followed the diplomatic stance already taken by Great Britain, France and the Netherlands.

Trudeau travelled to China in October 1973, where Chairman Mao honoured him with an audience in the Forbidden City. While impressed with Mao, Trudeau declared that Chou En Lai, China’s premier, was a fascinating personality, and the most impressive leader he had ever met. When he returned to Canada, Trudeau defended Mao’s policies in Parliament, seemingly unconcerned about their responsibility for the rape, torture, imprisonment and deaths of millions of people.

In retirement, Trudeau visited China with his children the year after the 1989 Tiananmen Square massacre. Trudeau had retained his celebrity status, and the Chinese government feted him as an official visitor with a full complement of banquets, speeches and an array of toasts. His son Sasha recalled that when his father was called to speak, he would invariably refer “very delicately” to the “difficulties” that China had recently faced. He later told his sons that China was an ancient land with its own internal imperatives. “Outsiders simply cannot know what is best for China or how it needs to travel down its chosen path.“ Few other Westerners resumed relations so quickly with the Chinese.

On Jan. 26, 1976, some 17 years after the Castro coup, Pierre Trudeau became the first Canadian leader, and the first NATO leader, to visit Cuba. Castro made international news at that time, not only for receiving the Canadian prime minister but also for sending his troops to fight in a civil war in Angola at the behest of the Soviet Union.

When Trudeau arrived in Havana he received a hero’s welcome, with 250,000 Cubans lining the streets, cheering wildly upon Castro’s command. Giant posters of Trudeau were plastered over the Cuban capital.

Trudeau publicly honoured the communist dictator with proclamations of “Viva Cuba” and “Viva Castro,” and “Long live prime minister and commander-in-chief, Fidel Castro.” A former Canadian ambassador described Trudeau as a “mentor” to Castro. Trudeau was overheard by reporters saying how much easier governing would be if things were run “the Cuban way.”

Castro and Trudeau enjoyed each other’s company and took a mini-vacation together, holidaying on the beach with their families in tow. This visit may have pleased Trudeau, but it caused consternation in the U.S., which had maintained a trade and travel boycott of the island dictatorship.

After Trudeau left office, he and Castro maintained their friendship, with Trudeau visiting Cuba on three occasions. Castro reciprocated by participating in the filming of a CBC documentary based on Trudeau’s memoirs where the men convivially conversed in Spanish. The Canadian ambassador to Cuba, Mark Entwistle, described Trudeau and Castro as intellectual soulmates.

When Trudeau died, Castro declared three days of official mourning. The flags on government buildings in Cuba flew at half-mast, as they would for a native hero. Castro called Trudeau a world-class statesman and a close personal friend whom he greatly admired. The coziness between Canada and Cuba ended with Trudeau. Mulroney made a point of not travelling to the country while prime minister. Jean Chrétien visited Cuba in 1998, but raised the plight of four political prisoners, displeasing Castro in the process.

When Trudeau died in 2000 Fidel Castro served as an honorary pallbearer.  It is difficult to imagine Castor bestowing such an honour on any other leader of his day, or any leader of a developed nation agreeing to accept such a distinction.

Nothing in the Trudeau-Castro friendship tangibly benefited Canada. What it did was annoy our closest ally and best customer. When Trudeau demanded action from the Americans on Acid Rain the Reagan White House classified two National Film Board productions on the matter “political propaganda.” When Trudeau went to Washington with his “peace initiative” in 1983, former Nixon advisor Patrick Buchanan appeared on CBC television to say the Reagan administration would entertain the proposal “with all seriousness as if it had come from Boys Nation [the annual civic training event for junior high school students]. Another American commentator, Eleanor Clift, wryly observed that Trudeau did not have enough country to satisfy his ambitions.

Derek Burney, Canada’s former Ambassador to the United States, concluded that Trudeau was a consummate actor. “He got attention on the world stage, but few results.”
Please share this.
Posted by alpha411net at 8:45 PM