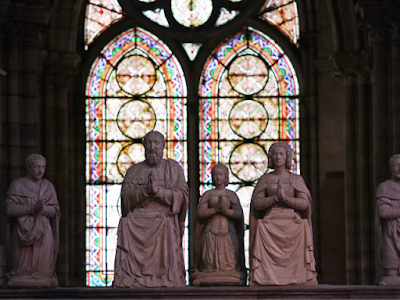 ROME — Christian sites in Europe suffered a record number of attacks in the year 2019, with some 3,000 Christian churches, schools, cemeteries, and monuments vandalized, looted, or defaced.

“Sadly, 2019 was punctuated by increasing incidents of desecration and vandalism of churches around Europe, along with the 2019 fire at the Notre-Dame Cathedral, which captured worldwide attention,” the director of The Observatory on Intolerance and Discrimination Against Christians in Europe, Ellen Fantini, told Breitbart News on Saturday.

“In most instances the perpetrators of these acts were unidentified, but the Observatory has documented that churches and other symbols of Christianity in Europe are targets for many groups — from Islamists to radical feminists, LGBT activists to anarchists and self-proclaimed Satanists,” Ms. Fantini said.

In all, some 3,000 Christian churches, schools, cemeteries, and monuments were vandalized, looted or defaced in Europe during 2019, making it a record year for anti-Christian sacrilege.

The greatest number of acts of violence against Christian sites have occurred in France, where churches, schools, cemeteries, and monuments “are being vandalized, desecrated, and burned at an average rate of three per day,” according to reports citing government statistics.

Germany is not far behind, with attacks against Christian churches happening at an average rate of two per day. Meanwhile, attacks on Christian churches and symbols regularly occurred in 2019 in Belgium, the UK, Denmark, Ireland, Italy, and Spain as well.

While the violence overwhelmingly involves Roman Catholic sites and symbols, in Germany, Protestant churches have also been targeted.

Police and mainstream media almost always censor information about the identities and ethnic backgrounds of the perpetrators, so it is difficult to get a clear idea as to who is committing the crimes and the motives behind them — especially when they are religiously driven.

In France and Germany, the sharp rise in anti-Christian attacks has coincided with the recent mass immigration from the Muslim world, yet the lack of official statistics makes it impossible to know precisely how many attacks can be attributed to Islamic anti-Christian hostility.

Fantini said she agrees with former UK Foreign Secretary Jeremy Hunt that “the UK and other Western governments have not grappled with the issue perhaps because of a misguided political correctness or an instinctive reluctance to talk about religion.”

In 2019, only nine European states reported hate crime data relating to Christians to the OSCE for their hate crime report, Fantini noted, which is fewer than the number of states that report hate crimes with an anti-Muslim or antisemitic bias.

According to Bishop Dominique Rey of Fréjus-Toulon, we are “witnessing the convergence of laicism – conceived as secularism, which relegates the faithful only to the private sphere and where every religious denomination is banal or stigmatized – with the overwhelming emergence of Islam, which attacks the infidels and those who reject the Koran.

“On one hand, we are mocked by the media that discredit the action of the Church, in particular regarding sexual abuse, and on the other, there is the strengthening of Islamic fundamentalism. These are two joint realities,” he said.