Why Drudge Report went to the dark side 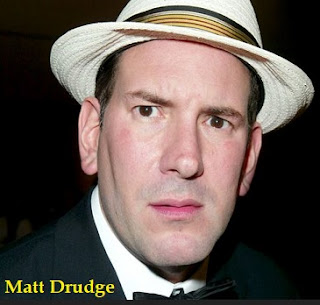 Begun as an email newsletter, Matt Drudge‘s the Drudge Report became a news aggregator website in 1996.
By 2003, Drudge Report became so popular it made almost $1.3 million a year in advertising revenues. In 2006, while dissing the Drudge Report, Time magazine named Matt Drudge one of the 100 most influential people in the world. In 2007, New York Times reporter Jim Rutenberg said that according to Nielsen/NetRatings, the Drudge Report got three million unique visitors a month, or approximately one percent of the population of the United States.
So successful is the Drudge Report that it has made its creator and editor Matt Drudge, 53, a multimillionaire, with an estimated net worth of $150 million.
What made Drudge Report so popular was its conservatism. Indeed, in 2001, Drudge told the Miami New Times that “I am a conservative. I’m very much pro-life. If you go down the list of what makes up a conservative, I’m there almost all the way.”
Drudge Report had supported Donald Trump in the 2016 election. But then I began to notice a change since Trump’s presidential inauguration when Drudge Report increasingly posted links to anti-Trump (and therefore anti-“Deplorables” — the 63 million Americans who had voted for him in 2016) mainstream media outlets like CNN and the Washington Post.
Simply put, I didn’t go on Drudge Report for CNN. So I stopped reading Drudge Report.
Sometime before WordPress took down FOTM on August 15, 2018, in comments on FOTM I broached the subject of Drudge Report ceasing being conservative. To ensure I wasn’t imagining things, I did a search online and found other websites saying the same thing. A longtime FOTM reader who had effusively praised FOTM and “Dr. Eowyn” took such issue with my observations about Drudge Report that he became verbally abusive. After I banned him from commenting, he sent me an email in which he stooped to racist and gender insults. All of which completely baffled me why he had so much invested in a news aggregator site that he took any criticism of Drudge Report as a personal affront.
Then TrailDust noticed the transformation of Drudge Report as well, and wrote two posts warning our readers:
A couple of our readers speculated that Matt Drudge turned to the dark side because he’s gay and has a new boyfriend. The never-married and childless Drudge has consistently denied the rumors of him being homosexual, but in January 2016, Southfloridagaynews.com reported that he had given away half of his real estate holdings to Juan Carlos Alvarado, his roommate of eleven years.
Citing a YouTube video by Josh Bernstein, Kelleigh Nelson of NewsWithViews has another explanation for why Matt Drudge went to the dark side. Below are excerpts from her November 9, 2019 post, “Drudge Sells Out Trump, Helps Democrats“:

Drudge used to break stories before the mainstream media or Fox News even knew about them; they went to Drudge to find out the latest.  Josh Bernstein recently exposed what has happened to Drudge.  He says we should boycott Drudge and I agree with him.
In a surprising turn, Drudge Report removed ads between the end of May and mid-July of this year according to Danny Rogers, a cofounder of the Global Disinformation Index, a project that’s analyzing domains to generate “risk ratings of the world’s media websites.” After noticing an absence of ads on Drudge around May 31, Rogers told BuzzFeed they didn’t see any ads on Drudge until about July 12.
During that period, Drudge cast off his advertising representative of close to 20 years, Intermarkets, in favor of a new and unknown company, Granite Cubed. It has no record in the digital ad industry, was only registered as a company in March of this year, and lists no staff or owners on its websites. Yet it just landed one of the biggest websites in the US.
Corporate records show that Granite Cubed is owned by Margaret Otto. According to Pathmatics, a marketing and advertising platform owned by Margaret Otto, she and her husband, Adrian, have close ties to both Matt Drudge and his father, Bob Drudge. The Ottos have known the Drudges since 1999.  Pathmatics, a marketing intelligence platform, estimates that over the past 12 months the site generated more than $30 million in ad revenue. Another estimate from the Global Disinformation Index, to be published in a report next month, pegs revenue at $9 million per year.
The Otto’s also acquired another company in 2017 founded by Bob Drudge called Refdesk.  Adrian Otto joined Google Cloud in 2017 and is their technical director. Matt Drudge is now in bed with Google and Alphabet Inc., the parent company of Google.
Alphabet Inc., Google subsidiaries, and YouTube all detest President Trump and everything on the Drudge Report has switched from supporting conservative sites and our president to leftwing media who despises President Donald Trump and his supporters.  Drudge’s links now go to mainstream media like CNN and MSNBC.  Conservative media is rarely seen anymore.
Drudge gave up his relationship with his conservative advertising company of 20 years and joined with the enemies of freedom because they are family vested via Matt’s father, Bob Drudge.
It all makes for a startling shift for a publisher best known for a strategy rooted in changing nothing about his site’s operation. It’s also causing the ad industry to look closely at the mysterious new firm and its high-profile customer.
Bigger bucks must be involved.  Shades of Anthony Scaramucci.

Here’s the video of Josh Bernstein:
It must be said that Bernstein’s account is of Matt Drudge switching Drudge Report‘s advertising representative to a new and unknown company, Granite Cubed, the husband-and-wife owners of which have ties to Matt’s father, Robert Drudge, who is a Democrat. But Matt’s father (and mother too) has always been a Democrat, and a constant (Robert Drudge being a Democrat) cannot explain a variable (Matt turning against Trump and embracing the liberal media). Nor does Matt changing Drudge Report‘s advertising representative explain his political transformation — changing advertising representative likely is a result, not the cause, of his political transformation.
And so, the reason for Matt Drudge’s and the Drudge Report‘s transformation remains a mystery.