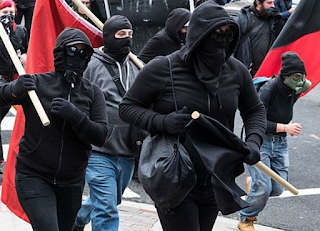 It shouldn’t be a big demand for left-wing groups to disavow Antifa violence wherever it occurs and certainly not to partner with the movement or its supporting organizations. This is especially the case for bellwether leftist groups, such as the Southern Poverty Law Center (SPLC), whose moral authority and influence is so strong within the left-wing universe. So why is the SPLC partnering with such a group in Canada?
Just like here in the United States, Antifa in Canada is a big problem. Recently, it issued a statement to a Canadian broadcaster that read, “Sometimes, it is necessary to go against what the mainstream considers ‘acceptable,’ to break the law in order to do the ethical thing.” Such Antifa “ethics” are routinely put on display north of the border.
Over the last few years, Canadians have watched Antifa assault journalists, batter innocent bystanders, destroy public and private property, and even firebomb buildings. Events Antifa deems “fascist” or “hateful,” including Christian and standard conservative events, are routinely obstructed by way of onsite violence, phoned-in death threats, or, as in one instance this month, public defecation. Such suppressed and near-suppressed events have included, ironically enough, public discussions focused on the importance of free speech in democratic societies.

We Have to Commit Violence, We Read an Op-Ed

Recently, Antifa garnered national news coverage in Canada when a group of its members, including a Syrian immigrant, were filmed outside one such forum physically intimidating an elderly woman with a walker and shouting in her face, “Nazi scum, off our streets.” The forum was organized by political commentator Dave Rubin along with candidates of the People’s Party of Canada: a new conservative political party which, unlike the establishment conservatives, is calling for a reduction of Prime Minister Justin Trudeau’s near-record immigration levels.
Reports and other footage from the event recorded dozens of other attendees being shoved, spat on, and subjected to the same “Nazi scum” chants as was the elderly lady (whose relatives, I should add, apparently fought actual Nazis in World War II). Officers arrested several Antifa members as a consequence of their violence.
That incident was apparently a response to an op-ed appearing in the local newspaper. It accused Rubin and his guests of “ushering people into the neo-Nazi movement” and demanded the venue renege its contract — which nearly happened after venue operators claim to have received threats.
Behind the op-ed was an outfit called the Canadian Anti-Hate Network (CAN), a self-described “hate-monitoring” organization based in Toronto. Not only does CAN model itself on the SPLC, it maintains a partnership with the group, which has included receiving SPLC funding and support.
Unsurprisingly, the two appear to follow the same business model. Just like the SPLC, CAN makes inflated and fearmongering claims about the number of threatening “hate groups” operating in Canada. While the SPLC outlandishly puts the number of such groups in the United States at more than 1,000, CAN officials put the number in Canada around 300, a far higher figure considering the country’s relatively tiny population.

CAN goes a step further than the SPLC, however, in that CAN has actually expressed support for the Antifa movement, including its belligerence, balaclava-wearing intimidation tactics, and even its extremist violence. CAN Chairman Bernie Farber, for instance, has praised the use of “muscular resistance” as an alternative to “peaceful protest.” Another CAN official, Richard Warman, has reportedly provided funding to violent Antifa groups.
In a tweet to followers after the recent old lady-bashing incident, CAN leader Evan Balgord admonished the offenders’ failure to “be media aware” and praised the other menacing Antifa attendees for having taken a “principled stand.” In a blog post in which Balgord tries to “explain Antifa,” he mounts an outright defense of the group, writing that Antifa critics present “a distorted image of the movement [when they] point to examples of anti-fascists using black bloc (confrontational) tactics to suggest that recent responses to racist groups is somehow equivalent to or responsible for the violence of the racist alt-right movement.” To do so, he claims, is to create “a false equivalency.”
Putting aside the broad brush Balgord uses to paint as “alt-right” the groups he and Antifa simply do not like, and his obvious downgrading of Antifa violence to mere “confrontational tactics” or “natural responses to racism” — elsewhere in the post, he uses “physical disruption” in lieu of actually saying “violence” — he’s openly stating that the public should place Antifa above the normal moral strictures they apply to everyone else.
In other words, if you apply objective standards for condemning violence — for instance, by asking, “What if an unprovoked ‘alt-rightist’ shoved and spat on peaceful attendees at a free speech event?” — you’re guilty of making a “false equivalency” (and you’re probably “Nazi scum” on top of it).
Elsewhere, he writes that Antifa does engage in “physically removing the opposition” as well as “violence and property damage while wearing masks. … However, they maintain that this violence is defensive in nature.” Sure, but don’t all violent groups paint their tactics in such defensive terms? And if the other side took this same line, would Balgord similarly take them at their word? Or might he perhaps observe them with a tad more scrutiny?
The SPLC must disavow its northern partner for defending, embracing, and empowering Antifa both in Canada and indirectly elsewhere. As in America, globalist extremism in Canada is accelerating. Failing to disavow such activities only normalizes them, pushing groups like Antifa even further into the dark, aimless world of terrorism and treason.
Brad Betters is a private practice attorney who formerly worked in U.S. and Canadian conservative politics.