Angela Merkel: Nation States Must "Give Up Sovereignty" To New World Order 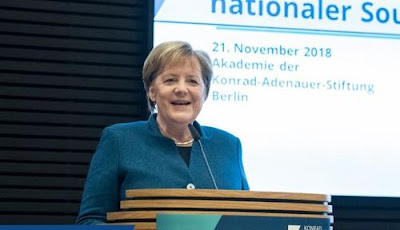 “Nation states must today be prepared to give up their sovereignty”, according to German Chancellor Angela Merkel, who told an audience in Berlin that sovereign nation states must not listen to the will of their citizens when it comes to questions of immigration, borders, or even sovereignty.

No this wasn’t something Adolf Hitler said many decades ago, this is what German Chancellor Angela Merkel told attendants at an event by the Konrad Adenauer Foundation in Berlin. Merkel has announced she won’t seek re-election in 2021 and it is clear she is attempting to push the globalist agenda to its disturbing conclusion before she stands down.

“In an orderly fashion of course,” Merkel joked, attempting to lighten the mood. But Merkel has always had a tin ear for comedy and she soon launched into a dark speech condemning those in her own party who think Germany should have listened to the will of its citizens and refused to sign the controversial UN migration pact:

“There were [politicians] who believed that they could decide when these agreements are no longer valid because they are representing The People”.

“[But] the people are individuals who are living in a country, they are not a group who define themselves as the [German] people,” she stressed.

Merkel has previously accused critics of the UN Global Compact for Safe and Orderly Migration of not being patriotic, saying “That is not patriotism, because patriotism is when you include others in German interests and accept win-win situations”.

Her words echo recent comments by the deeply unpopular French President Emmanuel Macron who stated in a Remembrance Day speech that “patriotism is the exact opposite of nationalism [because] nationalism is treason.”

The French president’s words were deeply unpopular with the French population and his approval rating nosedived even further after the comments.

Macron, whose lack of leadership is proving unable to deal with growing protests in France, told the Bundestag that France and Germany should be at the center of the emerging New World Order.

“The Franco-German couple [has]the obligation not to let the world slip into chaos and to guide it on the road to peace”.

“Europe must be stronger… and win more sovereignty,” he went on to demand, just like Merkel, that EU member states surrender national sovereignty to Brussels over “foreign affairs, migration, and development” as well as giving “an increasing part of our budgets and even fiscal resources”.