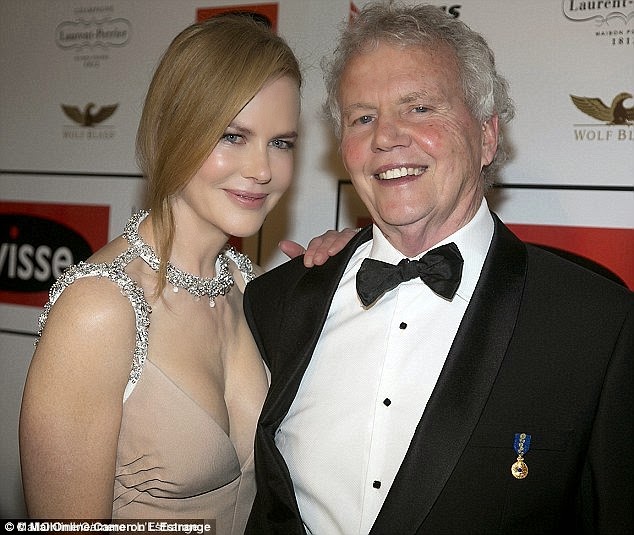 Dr. Antony Kidman died Friday after fleeing Australia when accused of the sexual abuse and murder of children in an elite Sydney pedophile ring. A month prior Fiona Barnett had filed a complaint with the Australian NSW police and Child Abuse Royal Commission alleging Kidman’s sexual and physical assaults on her throughout childhood. When the Commission opened an investigation the clinical psychologist suddenly left his 43 years with the Sydney University of Technology and Royal North Shore Hospital to stay in Singapore until he died. The family has refused to comment and Singapore police opened an investigation on what they termed as an unnatural death.

Yesterday Barnett released her own theory about Kidman’s death,” The main perpetrator of my child sexual abuse, Antony Kidman, is dead after I filed formal complaints accusing him of the rape, torture and murder of children in an exclusive Sydney pedophile ring. As a child victim of mind control I feel he’s been sacrificed for failing to adequately program me.”

“Kidman was responsible for ensuring that I never disclosed pedophile ring activities that I witnessed as a child,” she continued. “He failed. News of Kidman’s death impacted me, someone who has undergone intense treatment. I know that there are other victims of Kidman’s crimes out there who are perhaps not as far along the healing path as I am. I anticipate that news of Kidman’s death may have a serious impact on these victims. A perpetrator’s death can even trigger suicidal ideation.

“My complaints last month to the Australian Child Abuse Royal Commission detailed two incidents in which Kidman subjected me to horrific physical and sexual assault” Barnett said. “But there are even more serious crimes against children that I witnessed Kidman commit as a member of the elite Sydney pedophile ring. Those complaints have gone to the International Common Law Court of Justice in Brussels.”

Barnett spoke out the day of Kidman’s death – White Balloon Day 2014 – an event aimed at raising awareness for Australian children affected by sexual assault. She stated, “My contribution to White Balloon Day 2014 is to urge my fellow victims of crime to fight the filth that this monster deposited in their minds and if they can muster the strength, join me in my effort to give a voice to victims who are no longer with us.”

The ICLCJ Court has been looking into Barnett’s allegations against Kidman in relation to their investigation of the global elite Ninth Circle Satanic Child Sacrifice Cult. Over sixty eyewitnesses such as Barnett have testified of Ninth Circle child sacrifice and pedophile activities that spanned the globe, including criminal activities against children in the Americas, Netherlands and UK commonwealth countries such as Australia.

The Ninth Circle was also said to have well organized and secretive human hunting parties that included pedophilia. Privately owned forest groves were believed used in the US, Canada, France and Holland. It appeared children and teens were obtained by the criminal drug syndicate Octopus, which was believed connected to the Vatican. The kidnapped children and teens were said to be stripped naked, raped, hunted down and killed.


Since the tender age of three Barnett had been trapped inside Australia’s vast pedophile network where children were sex trafficked, hunted down for sport and murdered. “In the late afternoon of Oct. 28 1975 I was taken to my sixth birthday party in the Kiama rainforest,” Barnett said. “The cordial was spiked with drugs. I fell asleep. When I awoke it was dark and I was lying naked face-up spread-eagle on a picnic table with my hands and legs tied. Perpetrators took turns sneaking up on me. A large group of men arrived in pick up trucks. They carried rifles and had a pack of starving Doberman dogs. I was told that the group of naked children huddled nearby were my responsibility. I was to run and hide them. Every child I failed to hide would be killed and fed to the dogs. They painted something on my back and chest, and then released us. I pushed the children up over the first steep hill. It was about the second or third hill that the hunting party reached us. Shots were fired and children began dropping all around me. With all hope lost of my saving the other children, I took off and ran for my life.”

Dutch therapist Toos Nijenhuis testified at the ICLCJ Court that as a child and like Barnett, she was badly abused and forced to witness child murders that involved global elites, claimed childhood torture at Barnett’s same Australian Holsworthy Army Base and like Barnett, was a victim of Human Hunting Parties. Nijenhuis’ perpetrators included former Pope Joseph Ratzinger, Dutch Catholic Cardinal Alfrink and Bilderberger founder Prince Bernhard. Nijenhuis explained to International Tribunal into Crimes of Church and State Secretary Reverend Kevin Annett, her witness to child sacrifices as late as 2010.

The Ninth Circle Satanic Child Sacrifice Cult could easily hide crimes of their global elite members. They were well trained by Hitler’s mind control experts from Nazi Germany. Barnett’s Nazi grandfather’s pedophile network was said to include clinical psychologists Kidman and John W. Gittinger who developed a popular test among psychiatric professionals known as the Personality Assessment System. In the Independent Australia News Barnett stated that as a young child, “Gittinger abused and raped me.”

In another article of the Independent Australia News it was reported that Barnett’s dramatic testimony put members in tears when she went before the Australian Royal Commission into Child Sexual Abuse. Barnett had named as her perpetrators her grandfather, Kidman, two former Australian prime ministers, a Parliament House governor general and a state police commissioner. As with child pedophile rings in the Netherlands, Europe, Canada and the US, the Australian pedophile network was said to include police officers, psychiatrists, biochemists, psychologists, actors, writers, politicians, university lecturers and medical doctors.

“The Commission was in the process of investigating my complaint when Kidman was found to have left the country,” Barnett said. “Now one month following my notification against Kidman, he is dead. Kidman’s death comes as no surprise. In the past week alone, two people predicted his imminent demise.”

This article is dedicated to victims of the Vatican and mafia-run global elite Ninth Circle Satanic Child Sacrifice Cult, and to the memory of over 50,800 missing children, some of whom rest in 34 mainly Catholic-owned unmarked mass grave sites – that have been refused excavation – across Canada, Ireland and Spain. The child perpetrators continue to live lives free of responsibility for their ongoing crimes. Our prayers are with these innocents, and should be for ourselves if we allow this Child Holocaust by our global leaders to continue.

About the Author
Judy Byington, MSW, LCSW, retired, author of “Twenty Two Faces: Inside the Extraordinary Life of Jenny Hill and Her Twenty Two Multiple Personalities” (www.22faces.com) is a retired therapist, Public Speaker, Activist and investigative journalist whose articles on international child exploitation rings have been cited on hundreds of blogs and websites. The ex-Supervisor, Alberta Mental Health and Director Provo Family Counseling Center is the CEO of Child Abuse Recovery and Speakers Bureau (www.ChildAbuseRecovery.com).

If you have news tips about child abuse issues that may connect to international child exploitation rings, please email Judy info@22faces.com.

You are invited to sign our petition to Congress for an investigation of the CIA mind control of children by clicking here:  http://www.change.org/petitions/us-congress-survivors-request-investigation-cia-mind-control-of-children