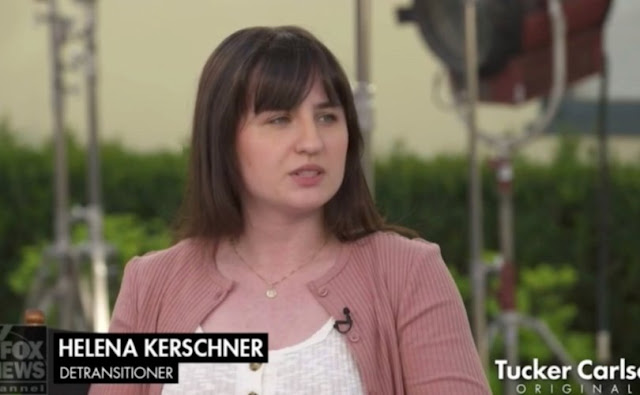 Helena Kerschner explains that “when I was fifteen, I was introduced to gender ideology on Tumblr and began to call myself nonbinary. Over the next few years, I would continue to go deeper and deeper down the trans identity rabbit hole, and by the time I was eighteen, I saw myself as a ‘trans man’, otherwise known as ‘FtM’. Shortly after my eighteenth birthday, I made an appointment at a Planned Parenthood to begin a testosterone regimen. At my first appointment, I was prescribed testosterone, and I would remain on this regimen for a year and a half. It had an extremely negative effect on my mental health, and I finally admitted what a disaster it had been when I was 19, sometime around February or March 2018.”

“When the disillusionment fully set in, I stopped the testosterone treatment and began the process of getting my life back on track,” she says. “It has not been easy, and the whole experience seriously derailed my life in ways I could never have foreseen when I was that fifteen-year-old kid playing with pronouns on Tumblr.”

“It’s completely normal for not only young girls, but often young boys to feel uncomfortable with themselves, uncomfortable with their body,” she tells Carlson in an upcoming interview for the Fox Nation subscription service. “But we have this ideology that is especially prevalent online that says that if you have those feelings, that means you’re trans. I mean, there are literally people who say, if you don’t even like your voice on a recording, that’s a sign of gender dysphoria, and you need to go see a medical professional because you’re trans.”

“I feel honestly grateful for the experience, because it’s taught me a lot about the world and about myself, but I really feel afraid for these other young girls like myself who they might not be, you know, I consider myself lucky that I was able to get out of it unscarred really medically, but there’s so many young people who can’t say the same,” she added. “And psychologically as well. I mean, it’s just devastating to, especially from a young age, be lied to, by adults at school, and by medical professionals and told that your body is wrong, you need to change it, you need to get hormones, you need to get surgeries. That’s devastating for a young person.”

The Post Millennial reports that a clip of the interview uploaded to YouTube was taken down, and in its place, YouTube left a disclaimer flagging it for supposedly “violating YouTube’s policy on spam, deceptive practices and scams.” A YouTube upload of the full Tucker Carlson Tonight episode in which the preview airs is still available at the time of this writing (segment begins at roughly 16:30).

YouTube has a history of discriminating against certain content on the basis of political viewpoint, including on the topics of COVID-19, “climate change,” and election integrity. In February 2021, YouTube deleted LifeSiteNews’ entire channel. The month before, YouTube appeared to delete an approximate total of 16,000 dislikes from three of the newly-inaugurated president’s videos (the company suggested at the time it merely deleted votes from spam accounts, an explanation the left-wing “fact-checking” outlet PolitiFact took at face value).

The Biden administration, meanwhile, has wholeheartedly endorsed “transitioning” children as a “best practice,” despite evidence that it is far from “life-saving.”

A range of scientific literature indicates that while reinforcing gender confusion may give a patient short-term satisfaction, over the long term it often fails to prevent, or actually exacerbates, significant emotional harm up to and including attempted suicide (with or without surgery), because fixating on “gender affirmation” tends to distract from exploring other issues that may be the actual root of a patient’s mental or emotional unrest and “transitioning” frequently comes with psychological side effects.

On top of those issues, experts outside the medical establishment warn that surgically or chemically reinforcing gender confusion imposes irreversible harm on children such as infertility, impairment of adult sexual function, and reduced life expectancy, as well as the psychological toll of being “locked into” physical alterations regardless of whether they change their minds when they mature. Studies indicate that more than 80 percent of children experiencing gender dysphoria outgrow it on their own by late adolescence, unless their confusion is reinforced by adults.

Medscape Medical News recently covered a forum giving voice to firsthand accounts affirming the above from more de-transitioners around the world, who also spoke about the biases, blind spots, and negligence on these points from the medical establishment. One of the participants, “ex-transgender” Michelle Alleva, argued that the need for strong evidence supporting a favored course is now disregarded in the name of a cultural agenda.

Alleva contends that pro-transition studies often suffer from failure to follow-up with patients over a long-enough period of time, and that transition regret is difficult to track because of the number of regretful patients who do not follow-up with their doctors. She also argues that “informed consent” for transition procedures cannot be satisfied without a thorough mental evaluation of a patient, not to mention the unknown variables of the interventions themselves.

“Some of us have lost trust in healthcare professionals as a result of our experience,” she lamented.