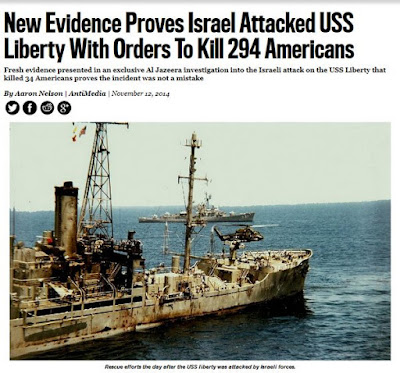 In the afternoon of June 8th, 1967 the United States came within six minutes of starting a nuclear war with the Soviet Union during the Six-Day War. At the direction of President Lyndon Johnson, US Navy aircraft from the USS America armed with nuclear weapons were ready to launch with Cairo their target. The Soviet Union told the US that soon after the first nuke went off in Egypt, another would be dropped on Jerusalem.

The conflict was a war of aggression on the part of Israel to seize more land on the road to Greater Israel. Contrary to the popular narrative espoused by Israel since 1967 that the war was in response to aggression on the part of Egypt actually the war had been years in the planning by both Israel and the United States. US Forces would enter the war on behalf of Israel based on a false flag operation similar in design to that of Operation Northwoods.

American and Zionist war planners needed a good visual target to be the subject of the false flag attack, which they would blame on Egypt. They settled on the USS Liberty, the most advanced spy ship in the US fleet. The Liberty carried a crew of 294 and was ordered to take up station near shore on the north side of the Sinai Peninsula. At the end of the unprovoked attack by unmarked IAF aircraft and later Israeli torpedo boats some 34 Americans crew died and another 171 were wounded. It was the most deadly event on a US Navy vessel during peacetime since the founding of the United States.

It's easy to understand why Israel would lie and try to hide the facts of what happen that day for the next fifty-four years but confusing in that why would the US government and US Navy led the parade of deceit for so long.

The true tale of what happened that day and the events that led up to it have been public for almost twenty years. An investigative reporter for The Sunday Times of London named Peter Hounam wrote a book titled, Operation Cyanide: How the Bombing of the USS Liberty Nearly Caused World War Three in 2003. He maintained the plot was a joint operation between LBJ and Israel. Planning for the Six Day War had actually taken place years before the actual commencement of battle.

Unlike President Kennedy, LBJ had never spent a day in combat even though General MacArthur awarded Johnson a Silver Star for being in a bomber that took off on a bombing mission but had to turn back because of maintenance. Those who have been in combat soon understand that no matter how great your war plans, the enemy gets a vote.

The Liberty should have sunk after being attacked for over an hour and a quarter by multiple unmarked aircraft and several PT boats flying the Israeli flag. The PT boats fired five torpedoes at the Liberty at point blank range. They only managed to hit with one. The incompetence of the Israeli navy may have prevented World War Three. The Russians were well aware of both the plans for the attack and the actual attack. They notified the Secretary of Defense and President Johnson that if the US nuked Cairo the USSR would nuke Jerusalem in response.

Hounam’s book was never a best seller even though it contained more information than any report going back to 1967. It’s just not the kind of book that most readers would pick up because it conflicted with the narrative made up by Israel and the US that the attack by Israel was a tragic mistake. A tragic mistake is when the Israeli navy machine-gunned the life rafts of the Liberty in an attempt to make sure all the Americans were killed. They had the unlimited gall to cut one life raft free and took it back to their base. Today it sits in an Israeli war museum as a trophy of their victory over the US Navy and the American people.

Lately a group has done extensive research into the attack and interviewed a number of survivors and put together a four hour and fourteen minute documentary titled Sacrificing Liberty available in either a video on demand for $12.99 or four DVD set for $19.99. I bought the DVD set.

I was a 20-year-old Marine lieutenant attending the Army Basic Intelligence School in Fort Holabird, Maryland in the summer of 1967 when the attack took place. It was inconceivable to anyone in the US military in the 1960s that Israeli could make such a mistake. Even at the time it seemed pretty strange to me that the highly vaunted Israelis could confuse a US ship for an enemy vessel.

Of course it wasn’t a mistake. It was a deliberate attack. The video called Sacrificing Liberty tells the whole story including how Lyndon Johnson surrounded himself with fanatic Zionists including having his own Mossad supplied whore. The video claims Johnson’s parents were Jewish and we know his daughter is a practicing Jew. Just whom did Johnson work for?

The video will leave the viewers with a sour taste in their mouths. The survivors of the Liberty get to tell their story for the very first time and it is pretty terrifying. Anyone who goes into the military needs to at least think about being attacked in combat. But who fears their supposed allies? What happens when the President of the United States is a traitor and all of those in your branch of service who you think will help you turn on you and leave you to die?

It took seventeen long hours after the attacks began before anyone from the Navy actually came to the aid of the Liberty. The survivors were taken aside and told that if they ever opened their mouths about what actually happened on June 8th they would be court-martialed. Or worse. We can only imagine what worse is.

In the video series we learn that Israel made an unprovoked attack on the basically unarmed Liberty. A fearless sailor managed to wire up the last remaining antenna on the Liberty after the first strafing attacks. When the USS Saratoga and USS America learned of the attack twice they attempted to launch aircraft to support the Liberty. Twice they were recalled at the direct order of LBJ and Secretary of Defense McNamara. When the Navy finally did show up the survivors were sent to remote duty stations all over the world and told to shut up.

Now many years later we learn in the video that the plan was a joint conspiracy to use an Operation Northwoods type false flag to murder American sailors so the US could justify an atomic bombing on Egypt on behalf of Israel. Of course Johnson was Vice President under Kennedy at the time of the Cuban Missile crisis so he would have known all about Northwoods in 1962. All he had to do in 1967 was dust off the plan and order his minions to execute the operation. And 294 Americans.

While it obviously is a good thing that Operation Cyanide didn’t start World War Three, the failed operation and ensuing cover up had long lasting ramifications on the relationship between Israel and the US. Israel was quite content to do their part in the cover-up and pretend that it was simple mistaken identity on their part and incompetence on the part of their forces so only 34 Americans died. Me bad.

Given that an American President and Secretary of Defense had literally committed treason, one of only three crimes defined in the Constitution, the attack and cover-up gave Israel not only a Get Out of Jail Free card, it had the effect of opening the Treasury of the United States and handed Israel a pen to write unlimited checks with the funds coming directly out of the pockets of American taxpayers. Today Israel gets 59% of the US foreign military assistance. Since World War II Israel has collected a total of $142 billion in aid from our taxpayers.

For those who think that since Israel is the only Democracy in the Middle East (it’s not a Democracy) and such a good friend and ally to the US so we should be funding and/or fighting all their wars for them, perhaps they should remember the attack on the Liberty, the Lavon Affair where Zionist terrorists attacked American interests in Egypt, the case of Jonathan Pollard who sent tens of thousands of top secret documents to his handlers in Israel who promptly passed them on to the Russians. After he was released from prison and finished his parole he flew to Israel and given a hero’s welcome. With friends such as Israel you don’t need enemies.

And last but hardly not least, when you finish watching Sacrificing Liberty and realize that the attack was nothing more and nothing less than an instant repeat of Operation Northwoods, if Israel and the US Government would be willing to murder 294 American military personnel in order to justify a false flag operation to nuke Egypt, why wouldn’t they do the same thing on 9/11 organized by a bunch of dual national Americans on behalf of Israel?

In thirty US States, the Zionist have forced through laws requiring an oath of office to Israel with a promise to not boycott the country. It’s OK to boycott Trump. It’s also OK to boycott Biden or K. Harris or the Pope or Japan or Mormons or Baptists or Catholics. Actually under the 1st Amendment to the Constitution it's ok for Americans to boycott whomever they choose.

Now that is power. The 1st Amendment gives all Americans freedom of speech. Except when talking about Israel.

Ever since the attack on the Liberty Israel has used its Get Out of Jail Free Card to commit any number of war crimes. It’s a state with borders that change on a daily basis that flouts all international law and utterly ignores UN resolutions. Because if anyone in the US Government fessed up to the treason outlined in Sacrificing Liberty, both the US and Israel would know the jig is up. There would be a revolution tomorrow.

The US has turned into Israel’s attack Chihuahua ready to pounce on whomever Israel orders them to. Israel isn’t above kicking the pooch now and again to keep its attention lest anyone in Congress or the Senate actually stand up and bark for America.

The relationship between the US and Israel is bad for both countries and eventually will result in the destruction of each. The rest of the world fully understands that Israel is a criminal state run by a mob of psychopaths. Catering to their demands is the very worst thing the US could do.

In 1947 the United States had no enemies in the Middle East.