What They Said about Lockdowns before 2020 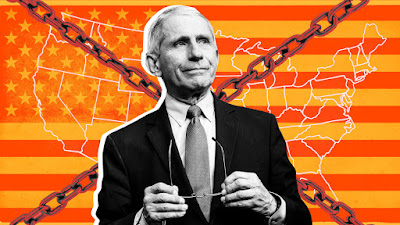 Authored by Micha Gartz of AIER.org

In 2020, beliefs about how to handle a new virus shifted massively. Prior to the Covid-19 pandemic, mainstream epidemiology and public health entities doubted – or even rejected – the efficacy of lockdowns and mass quarantines because they were considered ineffective. This all changed in March 2020, when sentiment flipped in support of lockdown measures. Still, there is a vast body of evidence explaining their original stance and why these mandates do not work.

Early into 2020, Fauci spoke to reporters saying, “That’s something that I don’t think we could possibly do in the United States, I can’t imagine shutting down New York or Los Angeles, but the judgement on the part of the Chinese health authorities is that given the fact that it’s spreading throughout the provinces… it’s their judgement that this is something that in fact is going to help in containing it. Whether or not it does or does not is really open to question because historically when you shut things down it doesn’t have a major effect.”

In a table, WHO lists their recommendations of NPIs depending on severity level. Quarantine of exposed individuals is categorized as “not recommended in any circumstances.” The report explains that “home quarantine of exposed individuals to reduce transmission is not recommended because there is no obvious rationale for this measure, and there would be considerable difficulties in implementing it.”

The WHO authors ultimately conclude that NPIs, including quarantining, require better and more focused methods to make them more effective and less “burdensome.” “Ill persons,” the authors assert, “should remain home when they first become symptomatic, but forced isolation and quarantine are ineffective and impractical.” Summarizing reports from the 1918 influenza pandemic the WHO cites Lomé (British-occupied Togo) and Edmonton (Canada) as places where “isolation and quarantine were instituted; public meetings were banned; schools, churches, colleges, theaters, and other public gathering places were closed.” Yet, despite additional measures (Lomé halted traffic, and Edmonton restricted business hours) in both cases “social-distancing measures did not stop or appear to dramatically reduce transmission.” A United States, comprehensive report on the 1918 pandemic also concluded that closures “[were] not demonstrably effective in urban areas but might be effective in smaller towns and rural districts, where group contacts are less numerous.”

The study simulated different levels of travel and found that travel limits could be effective but “that a policy of introducing quarantine at the earliest possible time may not always lead to the greatest reduction in cases of a disease.” The authors conclude that, “quarantine measures limiting intercommunity travel are probably never 100% effective, and simulation results suggest that such a situation may actually make things worse, especially in the absence of strong efforts to keep infectious individuals isolated from the rest of the population.”

Over a decade ago, Barry found that historically quarantines have been unsuccessful: “This author supports most proposed NPIs except for quarantine, which historical evidence strongly suggests is ineffective, and possibly school closing, pending analysis of recent events.” And instead promotes commonly touted measures, such as remaining home when unwell (and isolating from family members while doing so), frequently washing hands, and wearing a mask if you are sick. On the latter point he warns against healthy people wearing masks, noting: “Evidence from the SARS outbreak suggests that most health care workers infected themselves while removing protective equipment.”

Yanzhong Huang acknowledges that “travel restrictions and quarantine measures have limited benefit in stopping the spread of disease […] affecting travel and trade, dissuading the very kind of transparency and openness essential for a global response to disease outbreaks.” These measures ultimately undermine a country’s surveillance capacity because “people who show symptoms might choose to shun public health authorities for fear of quarantine or stigmatization [and squander] limited health resources […] Laurie Garrett of the Council on Foreign Relations [noted] by July signs of fatigue and resource depletion had already set in most of the world.

Study uses a multiplayer online game to simulate the spread of an infectious disease through a population composed of the players. The authors find that “people’s willingness to engage in safe behavior waxes or wanes over time, depending on the severity of an epidemic […] as time goes by; when prevalence is low, a ‘self-protection fatigue’ effect sets in whereby individuals are less willing to engage in safe behavior over time.” They say this is “reminiscent of condom fatigue—the declining use of condom as a preventive measure—in the context of HIV/AIDS prevention.”

In an article titled, “Disease Mitigation Measures in the Control of Pandemic Influenza,” JHU epidemiologists note problems with lockdowns: “As experience shows, there is no basis for recommending quarantine either of groups or individuals. The problems in implementing such measures are formidable, and secondary effects of absenteeism and community disruption as well as possible adverse consequences, such as loss of public trust in government and stigmatization of quarantined people and groups, are likely to be considerable.” Their concluding remark emphasized, “experience has shown that communities faced with epidemics or other adverse events respond best and with the least anxiety when the normal social functioning of the community is least disrupted.”

Specifically, they note that quarantines will only be effective when: (1) isolation is not possible; and (2) asymptomatic spread is significant and timed in a narrow way (none of which is the case for Covid). They conclude that “the number of infections averted through the use of quarantine is expected to be very low provided that isolation is effective.” And if isolation is ineffective? Then it will only be beneficial “when there is significant asymptomatic transmission and if the asymptomatic period is neither very long nor very short.” But, should mass quarantine be used it would “inflict significant social, psychological, and economic costs without resulting in the detection of many infected individuals.”

They explain how delaying the risk of infection can work counterintuitively when the pathogen is more lethal for older populations. They say, “Reducing the risk that each member of a community will be exposed to a pathogen has the attendant effect of increasing the average age at which infections occur. For pathogens that inflict greater morbidity at older ages, interventions that reduce but do not eliminate exposure can paradoxically increase the number of cases of severe disease by shifting the burden of infection toward older individuals.” Based on this analysis, Covid-19, which disproportionately harms the older more than the young, is better handled by allowing the community to be exposed, whether through natural infection or vaccination.

In the report, they explain how quarantine is more political than related to public health: “During an emergency, it should be expected that implementation of some NPIs, such as travel restrictions and quarantine, might be pursued for social or political purposes by political leaders, rather than pursued because of public health evidence.” Later on, they explain the ineffectiveness of quarantine: “In the context of a high-impact respiratory pathogen, quarantine may be the least likely NPI to be effective in controlling the spread due to high transmissibility.”

In March 2020, Michael Osterholm – now Biden’s Covid-19 advisor – also argued that lockdowns are not a “cure” for the pandemic, listing multiple costs from a lockdown. Yet, Osterholm’s New York Times article in August reveals a contrasting viewpoint, stating that “we gave up on our lockdown efforts to control virus transmission well before the virus was under control” by opening “too quickly.” Osterholm and (Neel) Kashkari promote a mandatory shelter-in-place “for everyone but the truly essential workers.”

Also in March 2020, these findings from the listed works and many others culminated in an open letter to vice-president Mike Pence signed by 800 medical specialists from numerous universities throughout the country which pointed out: “Mandatory quarantine, regional lockdowns, and travel bans[…] are difficult to implement, can undermine public trust, have large societal costs and, importantly, disproportionately affect the most vulnerable segments in our communities.”

While expert consensus regarding the ineffectiveness of mass quarantine of previous years has recently been challenged, significant present-day evidence continuously demonstrates that mass quarantine is both ineffectual at preventing disease spread as well as harmful to individuals. Learning the wrong lesson – assuming that mass quarantines are both good and effective – sets a dangerous precedent for future pandemics.