Italygate: is the Italian government directly involved in the US election fraud against Trump? 2 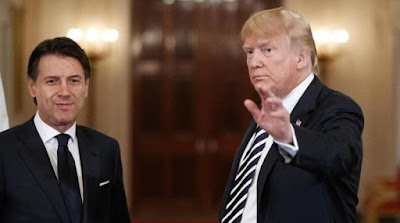 Apparently, Switzerland is not the only country that played a major role in the international hacking operation against the US election.

In the latest article published on this blog, the Swiss-American author and researcher Neal Sutz has explained how Switzerland has had a fundamental part in the international coup against Trump

Switzerland has recently bought the sole rights of Scytl, the company tied to Dominion Voting System which, according to several statistical analyses, had switched hundreds of thousands of votes from Trump to Biden.

Switzerland perfectly knew about the structural flaws of Scytl but it failed to warn the Trump administration about the technical malfunctioning of this software.

However, there is another country that could have had an even more crucial role in this story and that country is Italy.

In this regard, there is an interesting and sensational version of the fraud’s plot provided by Bradley Johnson, a former CIA agent and chief of one of the agency stations.

According to Johnson, basically Italy was directly involved in the manipulation of votes in the US elections.

The intelligence analyst partially confirms the story regarding the US special forces raid to recover Dominion’s servers hosted in the CIA Frankfurt station.

Other sources confirmed the authenticity of the story and apparently the raid was successful in retrieving the servers, which constitute an irrefutable evidence of the fraud.

General Thomas McInerney claimed that after the raid a violent fight had ensued between the CIA paramilitary called in from Afghanistan to defend the station and the US special forces group.

Five military members would lose their lives in the harsh battle.

Johnson offers another version, even more shocking if possible. The former CIA agent doesn’t deny this operation but he claims that the hacked data had been moved from Frankfurt to Rome, in the US embassy located in the central street of via Veneto.

According to Johnson, Frankfurt servers only hosted partial tracks of the hacking, but the real main protagonist of the attack would have been Rome.

During the election day, something unprecedented in the history of US election occurred.

Suddenly, the vote counting in the key states was simultaneously halted in the middle of the night, when in Italy was already morning.

The hacking operation was in course, but the perpetrators realized that there was something wrong.

“Trump was taking a record number of votes” says Johnson, and the switching of votes from Trump to Biden was not enough to definitely deliver the “victory” to the democratic candidate.

The US embassy in Rome allegedly involved in the hacking attack

At that point, Rome went on stage by receiving the data from Frankfurt, but a new elaboration of algorithms was necessary to finally change the outcome in favor of Biden.

Therefore, the operation to recalibrate the hacking attack would have taken place in via Veneto, and if this fact were to be confirmed the American embassy in Rome would be directly involved in an attempt to overthrow its President.

In this scenario, the subversive powers infiltrated in the US government, the deep state, had planned a coup d’état against their commander in chief.

At this moment, the US ambassador in Italy is Lewis Eisenberg, former member of Goldman Sachs and contributor to the first Trump campaign but at the same time close to the neocon Zionist lobbies which are bitter enemies of the President for his ongoing plan to withdraw the US military in the Middle East.

Johnson claims that during the election night in the US Rome embassy there was a man from the US department of State.

The former CIA agent shows in the video the picture of this man, apparently taken by the Italian authorities which were conducting a surveillance operation focused on this official.

This official would have been directly involved in the coordination of the hacking attack.

The role of Leonardo and the Italian government in the fraud

At this point, Johnson offers a revelation even more shocking.

There is another actor that played a crucial role in this operation and it is Leonardo, an Italian government company leader in the aerospace and defense sector.

Once that the hackers created the new algorithms to switch more votes from Trump to Biden,  they sent “these new numbers back up to a Italian military satellite operated by Leonardo” claims Mr. Johnson.

After been doing this, the new manipulated data were sent back to the Dominion voting machines in the US.

Therefore, if this version is correct, the Italian government would be directly involved in this attack.

Leonardo’s largest shareholder is the Italian government, because the Italian ministry of Economy owns 30% of this company.

Leonardo CEO, Alessandro Profumo, was appointed in 2017 by the former Italian PM Gentiloni, apparently involved in the Spygate as will be mentioned later, and confirmed in 2020 by Conte’s incumbent government.

Mr. Profumo was also recently found guily for committing fraud by an Italian court and he received a six-year jail sentence.

Therefore, Conte’s government would have played a decisive role in the hacking operation because it would have allegedly provided Leonardo’s technology to perpetrate a direct attack against the US sovereignity.

In this regard, it is important to mention that Conte’s government was among the first international executives which forwarded their congratulations to Joe Biden, when there was no , and there is still not , official confirmation of his alleged victory.

Italy in direct violation of the 2018 EO

If Mr. Johnson’s statements are true, Italy would be in direct violation of the 2018 Executive Order against foreign election interference signed by President Trump.

The President was not unprepared before the eventuality that foreign countries and internal forces within the US would have tried to meddle in the election.

The executive order clearly states after 45 days since the election day, a detailed report on this interference  has to be delivered to the President.

By postponing the delivering of the report to Trump, the US intelligence community put in place a sabotage.

However, it seems that the DNI director, Ratcliffe, could have delivered to Trump some parts of the report and that Trump would offer the position of special counsel to Sidney Powell.

The special counsel would have relevant powers with which it could impound the voting machines, especially the ones of Dominion, indict the authors of the fraud and seize the properties of the companies directly involved in the hacking attack.

The EO was clearly conceived to sanction foreign and domestic actors who had a part in the interference, and Italy, if Johnson’s version is accurate, would be in direct violation of this order by having perpetrated a direct attack against US national sovereignity.

If these shocking allegations were to be confirmed, an unprecedented diplomatic crisis could open between Italy and the US.

The US government could heavily sanction Italy for this meddling.

It turns out that the Italian deep state could be the key element to solve the crime of the electoral fraud against Trump, but it would be also fundamental to figure Spygate,  the first international sabotage against the President.

Spygate is the illegal espionage operation conceived against Trump in 2016 and Italy had a major part in it, because the Italian secret services, under the Renzi and Gentiloni administrations, would have aided their US counterpart in an attempt to falsely depict Trump as a “Russian agent”.

Therefore, there’s a red thread that ties the first sabotage against Trump and the second one, and this red thread is Italy and its subversive structure infiltrated in the heart of the Italian institutions.

In Italy, there’s a cover up on the Spygate because apparently even the so-called “opposition” doesn’t have a particular interest in shedding any light on this case.

Raffaele Volpi, a League Senator and President of Copasir, the Italian institution that supervises the Italian secret services, stated that Spygate is a story inflated by the media, unlike the Trump administration that defined it as a coup attempt.

Apparently, the first opposition party in Italy, the League, doesn’t have an interest in talking of Spygate, probably because Salvini, the leader of the League, seems quite close to Renzi, one of the alleged major figures in this scandal.

It is interesting to notice how both Renzi and Salvini have created a sort of alliance to pave the way to Mario Draghi as Italy’s next PM, and Draghi would be the man sent by globalism to trigger the Great Reset and give the coup de grace to Italy.

The Italian deep state is a swamp where the highest ranks of the State are deeply intertwined with the majority and the opposition.

This subversive power within the Italian institutions was used to perpetrate a permanent coup d’état against Trump.

The Italian media have no interest in exposing these powers because they are tied to them.

Therefore, a new disturbing chapter opens in the story of the international coup against Trump.

This chapter seems revealing that all the roads the US electoral fraud do indeed lead to Rome.