Vatican warns that feminism is "lethal" to families… 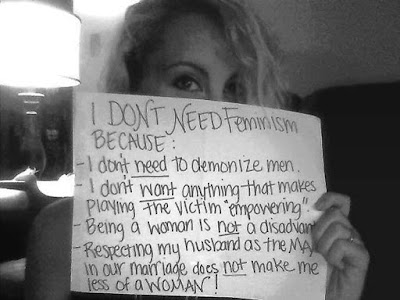 Modern feminism's fight for power and gender equality is undermining the traditional concept of family and creating a climate where gay marriages are seen as acceptable, the Vatican says.
In a 37-page document "On the Collaboration of Men and Women in the Church and in the World", the Vatican said women should be respected and have equal rights in the workplace, but differences between the sexes must be recognised and exalted.
"Recent years have seen new approaches to women's issues" including a tendency "to emphasise strongly conditions of subordination in order to give rise to antagonism", it said on Saturday.
The document, which re-stated Catholic Church positions, including the ban on female priests, said that many women felt they had to be "adversaries of men" in order to be themselves.
"Faced with the abuse of power, the answer for women is to seek power. This process leads to opposition between men and women ... which has its most immediate and lethal effects in the structure of the family."
The document is a booklet-letter to bishops by Cardinal Joseph Ratzinger, the head of the Congregation for the Doctrine of the Faith, the Vatican department in charge of safeguarding and interpreting doctrine.
It criticises feminism's attempt to erase gender differences.
This has "inspired ideologies which, for example, call into question the family in its natural two-parent structure of mother and father, and make homosexuality and heterosexuality virtually equivalent, in a new model of polymorphous sexuality," it says.

NO TO GAY MARRIAGE

Pope John Paul has repeatedly defended traditional marriage from the trend towards legalising same-sex unions in the United States and Europe.
After Massachusetts became in May the first state in America to permit gay marriages, the issue has been hotly debated ahead of U.S. presidential elections.
The document called for greater recognition of a woman's role as a mother and urged society to value it as real work.
But it also said women's access to the workplace and to positions of authority should not be limited.
"Although motherhood is a key element of women's identity, this does not mean that women should be considered from the sole perspective of physical procreation," it said.
The Vatican said women who choose to be full-time mothers should not be stigmatised, but at the same time, it appealed to governments to make it easier for mothers to hold outside jobs without "relinquishing their family life".
In the introduction, Ratzinger says the letter is meant "as a starting point for further examination in the Church, as well as an impetus for dialogue".
Among other issues, the document addresses the recurring question of whether the priesthood should be opened to women -- a possibility repeatedly denied by the pope.
The document says woman's role within the Church as a witness and "bride", as exemplified by the Virgin Mary, is key but different from man's.
"The reservation of priestly ordination solely to men does not hamper in any way women's access to the heart of Christian life," it said.
The Church teaches that it cannot change the rules banning women from the priesthood because Christ chose only men as his apostles.
Groups that favour female ordination say Christ was only acting according to the social norms of his times.