Pierre Trudeau punched his ex-wife according to 1979 news story 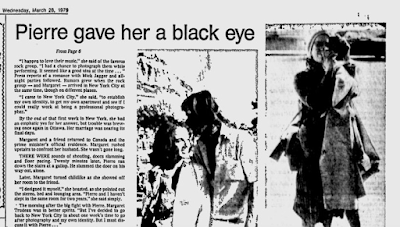 Recently discovered on the internet is a 1979 Milwaukee Sentinel feature story on Margaret Trudeau that most Canadians will find quite shocking. In a wide-ranging article that touches on her photography, her affairs, and her separation from Pierre Trudeau, Margaret reveals that her former husband, the late Prime Minister, was physically violent toward her and “slugged” her, giving her a black eye.

The article describes a scene where there were sounds of “shouting, doors slamming, and floor pacing.” It goes on to reveal that when Pierre was made aware of an interview that Margaret had given, he “hit the roof and then hit Margaret. She loved it.”

Trudeau’s full comments on the incident read as follows:

Pierre SLUGGED me. He’s given me a black eye. But things are going to be okay. He doesn’t mind my being a photographer.

Actually, I was quite pleased. It was the first time in a very long while that I’d been able to get a response out of Pierre. He got all his hostility out, and he hasn’t shown me so much attention in years!

It showed me he really loved me. In a strange way it’s made us closer … I guess I felt this was his way of showing that he cared. Pierre must have felt closer to me too, because that night he was very “macho.”

In a more recent Globe and Mail article from 2009, Margaret Wente appears to confirm that Pierre was abusive to Margaret as she writes the following in a matter-of-fact manner: “After they split up, he insisted on custody of the children and cut her off with scarcely a dime. He even gave her a black eye or two.”

Awareness of violence against women has been in the spotlight in recent years as a result of the #metoo and #timesup movements.

Given the fact that we are in the #metoo era, and that our current Prime Minister, Pierre’s son, has been alleged to have acted inappropriately toward women, it will be intriguing to see how Canadians react to this recently unearthed information.