Record opposition among Canadians to taking in more immigrants

OTTAWA — Canadians have been dubious for decades about the merits of increasing levels of immigration, but a new report also suggests growing opposition to immigration over the past few years.

The report from the Angus Reid Institute analyzes polling data going back to 1975 to show that, throughout that period, a relatively constant number of Canadians — around one in four — have always said they think immigration levels should be decreased, while support for keeping levels the same has tended to be slightly higher. Only about 10 per cent of Canadians have supported increasing the levels during that time.

A survey conducted in late July by the Angus Reid Institute, however, does show a spike in opposition to immigration, which the organization says coincides with “more frequent and increasingly fraught conversations about policy regarding immigration and migration to Canada.”

Shachi Kurl, executive director of the Angus Reid Institute, said they chose those past surveys as comparisons because they asked the same questions about immigration. But she also said the 2018 numbers have to be taken as cautionary until they do more study.

“We’re seeing a notable change in the trendline, but it’s one data point, so what we can’t know yet is: are we seeing a country that’s now trending in a particular direction, or are we experiencing a moment in time?”

She also said it’s hard to tell yet whether the heated political discussion around immigration is driving public opinion, or vice versa.

“One data point doesn’t make a trend. We have to wait and see where sentiment goes over the next couple of years.”

The 49 per cent who think immigration should be lower is the highest number in the historical data; the second-highest was in 1995, when 45 per cent wanted lower immigration.

The 2018 survey was conducted among 1,500 Canadian adults who are members of the Angus Reid Forum. The survey doesn’t have a margin of error, but a probability sample of this size would carry a margin of error of 2.2 percentage points, 19 times out of 20.

Broken down by province, the 2018 survey shows fairly even numbers across Canada, with Manitoba and British Columbia showing the least opposition.

“In Ontario, the province where most immigrants settle by a wide margin, one-third are satisfied with national levels, while half say they should be reduced,” the report notes.

Kurl said the left-wing parties shouldn’t underestimate their own numbers. “There is a significant segment of that left-of-centre base that is also of the view that we’re accepting too many immigrants,” she said.

The report shows education levels substantially affect views on immigration. “Those with (university) degrees are twice as likely to say more immigrants should be accepted,” the report says. 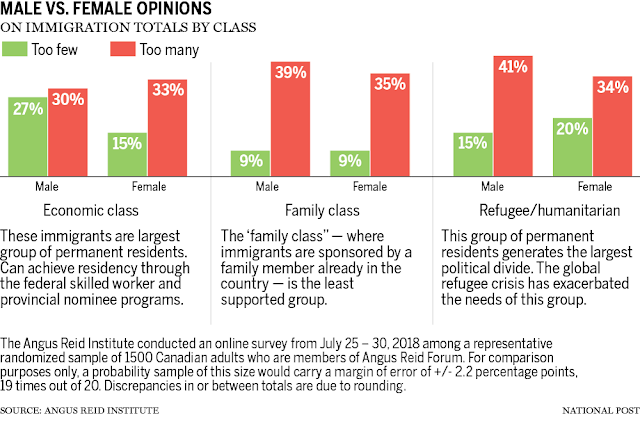 Economic immigrants were the most supported group, with 20 per cent of all respondents saying levels should be increased and 32 per cent saying they should be decreased. Conservative voters were the most likely to support increasing this class, with 26 per cent in favour.