Sweden: 88 Per Cent of Gang Rapists Have a Migrant Background, Perpetrators have a “distorted view of sexuality” 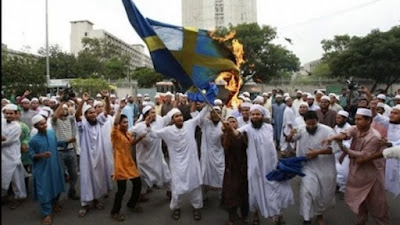 A study by the Swedish newspaper Aftonbladet has found that 88 per cent of gang rapists in the Scandinavian country over the last six years have had a migrant background.

82 of the 112 convicted gang rapists were born outside of Europe, while just 13 had two Swedish parents, meaning that 88 per cent had a migrant background of some sort.

25 of the culprits were from Afghanistan, 9 from Iraq and 7 from Somalia.

The study also found that the victim’s median age was just 15-years-old, with most perpetrators being aged between 15 and 20 years old.

The number of gang rape convictions has more than doubled in four years, with Aftonbladet explaining that perpetrators have a “distorted view of sexuality” which leads them to mistreat women.

Last month, it was reported that a Swedish woman who had campaigned in favor of migrants and refugees was brutally gang raped by two Afghan migrants whom she agreed to follow back to their asylum center after a night out.

A private study of 4,142 rulings regarding sex-related crimes passed by 40 Swedish courts between 2012 and 2014 found that 95.6% of rapes were committed by men of foreign descent.

Two out of three rapes with aggravating circumstances were committed by newly arrived migrants or approved asylum seekers. Official crime statistics show that reported rapes have increased 34% in the last 10 years.

With national elections coming up in September, the anti-mass migration Sweden Democrats are polling number one amongst people aged 18-34.