Christians Are The World’s Most Oppressed Religious Group: Pew Study 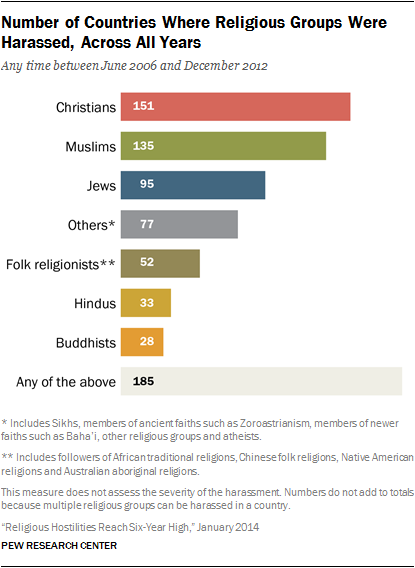 WEB Notes: Of course Christians are, they are the enemy of Satan.

(CNS News) - Restrictions, harassment, and intimidation towards people who practice their religion increased in every major region of the world in 2012 except the Americas, with Christians the major target, says a new report by the Pew Research Center. “Muslims and Jews experienced six-year highs in the number of countries in which they were harassed by national, provincial or local governments,” the study found, but Christians continue to be the world’s most oppressed religious group, with persecution against them reported in 110 countries.

A fifth of the world's nations (20%) also experienced religious terrorism or sectarian violence in 2012, Pew researchers found, which was “up markedly from 2007 (9%).”

President Obama expressed hope that the “Arab Spring” would give rise to greater religious freedom in North Africa and the Middle East, which has had the world’s highest level of hostility towards religion in every year since 2007, when Pew first began measuring it. However, the study finds that these regions actually experienced the largest increase in religious hostilities in 2012.

Across the six years that Pew has conducted the study, Christians were being harassed for their faith in 151 countries and Muslims in 135. Together they represent the world’s two largest religious groups and more than half of the world’s population.

Jews, who make up less than 1% of the world’s population, experienced religious persecution in 95 countries. Researchers also found an increase in religious harassment in countries where Hindus, Buddhists or followers of other traditional religions predominated.

"Among the world's 25 most populous countries, Egypt, Indonesia, Russia, Pakistan and Burma (Myanmar) had the most restrictions on religion in 2012,” the report stated. Pakistan had the highest level of social hostilities involving religion, while Egypt had the highest level of government restrictions on religious practice, Pew found. - CNS News: Pew Study: Christians Are The World’s Most Oppressed Religious Group