Pope Francis is the Catholic Church’s Obama – God help us 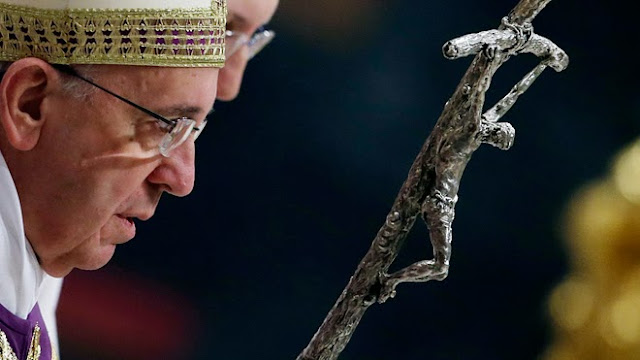 Pope Francis is undergoing a popularity surge comparable to the way Barack Obama was greeted by the world in 2008. And just as President Obama has been a disappointment for America, Pope Francis will prove a disaster for the Catholic Church.

My fellow Catholics should be suspicious when bastions of anti-Catholicism in the left-wing media are in love with him.

Much is being made of his ‘compassion’ and ‘humility,’ but kissing babies and hugging the sick is nothing new. Every pope in recent memory has done the same, yet only now are the media paying attention. Benedict XVI and John Paul II refused to kowtow to the liberal agenda, and so such displays of tenderness were under-covered.

Francis is beating a retreat for the Catholic Church, and making sure its controversial doctrines are whispered, not yelled – no wonder the New York Times is in love.

But Francis is beating a retreat for the Catholic Church, and making sure its controversial doctrines are whispered, not yelled – no wonder the New York Times is in love.

Just like President Obama loved apologizing for America, Pope Francis likes to apologize for the Catholic Church, thinking that the Church is at its best when it is passive and not offending anyone’s sensibilities.

In his interviews with those in the left-wing media he seeks to impress, Francis has said that the Church needs to stop being ‘obsessed’ with abortion and gay marriage, and instead of seeking to convert people, “we need to get to know each other, listen to each other and improve our knowledge of the world around us.”

This softly-softly approach of not making a fuss has been tried before, and failed. The Second Vatican Council of the 1960’s aimed to “open the windows” of the Church to the modern world by doing just this.

The result was the Catholic version of New Coke. Across the West where the effects were felt, seminaries and convents emptied, church attendance plummeted, and adherence to Church doctrine diminished.

Proof of this is Francis’ aforementioned statement of the Church being obsessed with controversial issues and the need to rebalance by talking about it less.

That Francis didn’t see that this would be translated into headlines of “Pope tells Catholics to shut up about things that offend Sandra Fluke” by every left-wing media outlet shows a terrifying naivety.

Nor do his comments reflect reality.

For years, the majority of priests didn't dare cover controversial topics in their homilies in fear of getting angry letters from pick-and-choose Catholics outraged that their pastor dared to say something out of line with the Democratic Party.

In trying to please the media and the modern world, Francis mistakes their glee for respect. Just like Obama thought he’d won over Putin by promising a reset, Francis thinks by talking vacuously about the poor, he will be respected. And it is vacuous -- the pontiff recently asked why it’s news that the stock market drops but not when an old person dies. When your leader is asking, “Why isn’t the newspaper a laundry list of obituaries?” you know you elected the wrong guy.

What effect is this having? For all we’re being told about how ‘disenfranchised’ Catholics are being brought back by Francis ‘reaching out,’ a recent Pew Research study showed that in America, the number of people who identify as Catholic has actually decreased.  Lesson: rubbing the egos of Church-hating left-wingers doesn’t make more Catholics, it just makes the Church less respected.

Francis not only panders to enemies and professional grievance mongers, but also attacks his allies. Just as Obama snubs Britain and Israel, Pope Francis swipes at practicing Catholics.

So not only has he insulted, and severely damaged the work of, pro-life and pro-marriage groups with his comments, he has also gone on the attack, dismissing Catholics who attend the older rites in Latin as ‘ideologizing’ and being guilty of ‘exploitation.’ Apparently “Who am I to judge?” doesn’t apply here.

On world matters, Francis’ statements are embarrassing. About communism, a destructive ideology that slaughtered millions of Catholics, he said:

“Learning about it through a courageous and honest person was helpful. I realized…an aspect of the social, which I then found in the social doctrine of the Church."

Not such kind words for the free market, however. In his recent apostolic exhortation he slammed unfettered capitalism, calling it ‘a new tyranny.’

Apart from the fact that there is no major nation practicing unfettered capitalism (like Obama, Francis loves attacking straw men) there is more real tyranny in socialist cesspools like Francis’ home of Argentina than in places where capitalism is predominant.

In the document he rejects the free market and calls for governments to overhaul financial systems so they attack inequality. In doing so he shows himself painfully misguided on economics, failing to see that free markets have consistently lifted the poor out of poverty, while socialism merely entrenches them in it, or kills them outright.

Like Obama, Francis is unable to see the problems that are really endangering his people. Like Obama he mistakes the faithful for the enemy, the enemy for his friend, condescension for respect, socialism for justice and capitalism for tyranny.

As a Catholic, I do hope Francis’ papacy is a successful one, but from his first months he seems hell-bent on a path to undo the great work of Benedict XVI and John Paul II, and to repeat critical mistakes of the past.
Please share this.
Posted by alpha411net at 12:04 AM