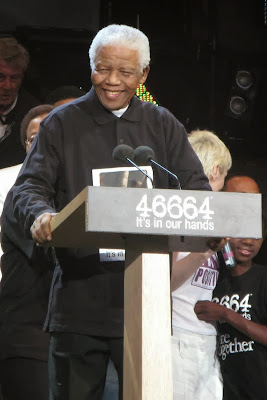 Expect Obama to use your hard-earned confiscated tax dollars to pay for an expensive trip to South Africa where he will attend Nelson Mandela’s funeral.

The chief teleprompter reader for the banks and corporations that control the government has already ordered flags be flown at half mast. This 17th century ritual is usually reserved for members of U.S. government officialdom, but Mandela is a special case.
Nelson Mandela stands atop a hallowed pedestal in the pantheon of political correctness. His struggle against the scourge of apartheid – government sanctified racism – was fashioned into a human rights struggle by the establishment and its propaganda media. The distorted image of Saint Mandela has been dutifully scrubbed of its dark side. There is no room for truth or historical fact as the tribute to Saint Mandela unfolds and will continue to do so well into next week and beyond.
Here’s what you won’t hear. Nelson Mandela was a terrorist. His Umkhonto we Sizwe, the military wing of the African National Congress, targeted civilians.
On May 20, 1983, Umkhonto we Sizwe (aka “Spear of the Nation”) set off a car bomb near the Nedbank Square building on Church Street in the South African capital of Pretoria. The bomb was timed to go off at the height of rush hour. The attack killed 19 people and wounded 217.
From the BBC, May 20, 1983:

A huge pall of smoke rose hundreds of feet into the air as debris and bodies were strewn around the scene of the explosion.
It is understood the bomb had been placed in a blue Alfa Romeo car outside the multistory building, which houses the South African air force headquarters.
It exploded at the height of the city’s rush-hour as hundreds of people were leaving work for the weekend.
Glass and metal were catapulted into the air as shop-fronts and windows were blown out.
Many passers-by had limbs amputated by the flying debris. Others bled to death.

MSNBC and CNN and even Fox will not mention this today as they celebrate Mandela’s “extraordinary example of moral courage, kindness, and humility,” as the White House put it.
Of course, it is hardly surprising the government and its media would praise a terrorist and make him out to be saint. It does this all the time.
From Taliban “freedom fighters” (as the script-reader Reagan dubbed them) who would later become convenient enemies to the creation and support of al-Qaeda and its terrorist operations in Afghanistan, Bosnia, Libya, Syria and elsewhere, the U.S. government remains actively in the business of manufacturing terrorists, although most of them are not anointed with sainthood like Nelson Mandela.
But, when you think about it, Mandela is merely a low-level terrorist when stacked up against the sort of psychopaths and knuckle-draggers the U.S. government has supported over the years, including General Augusto Pinochet in Chile and General Suharto in Indonesia, to name but two.
Pinochet, with the help of the CIA, disposed of political enemies by throwing them out of helicopters. He was also behind a terrorist car bombing in Washington, D.C., that killed Chile’s ambassador and American citizen Ronni Moffitt. Suharto, a brutal dictator who was installed by the CIA, massacred countless thousands of his fellow Indonesians and arrested and tortured more than 750,000 others.
Other notable examples include Pol Pot in Cambodia. His genocidal Khmer Rogue was favored by the ruling elite as a counter force to Vietnam after it fell to communists outside the bankster sphere of influence. It would take the country a couple decades to transform itself into a globalist slave labor gulag.
It probably will not be mentioned today or in the coming week that in the not too distant past the government Obama now represents (or reads a teleprompter for) supported racists in South Africa and Rhodesia.
Reagan, who liked to fashion himself a libertarian (or his speechwriters did, anyway), supported P.W. Botha’s South African government and its “total war” on a black majority. Nixon did likewise when Ian Smith’s Rhodesian government engaged in starving to death citizens who wanted to throw out the white minority government ruling with an iron fist.
The list of favored thugs and mass murderers is long and sordid. It includes tenacious bankster support for Adolf Hitler and the Nazis (supporters included members of the Bush crime family).
Finally, while Obama and the establishment lionize Mandela and couple him to the struggle for human rights in Africa, the Pentagon continues its move into the continent under the rubric of AFRICOM, the U.S. military command for Africa. In order to put this into perspective, consider the invasion of Libya that killed more than 30,000 of the north African nation’s citizens and installed al-Qaeda and the crazed jihadists.
AFRICOM is designed to pacify the region ahead of normal bankster operations conducted by the World Bank and the IMF. AFRICOM’s mission was underscored by Vice Admiral Robert T. Moeller at Fort McNair on February 18, 2008, when he declared the guiding principle of AFRICOM is to protect“the free flow of natural resources from Africa to the global market.”
Nelson Mandela is another establishment generated distraction. His sanitized presence in the manipulated flow of corporate media propaganda and entertainment fluff is designed to bolster the latest tool of domination devised by the ruling elite – color and culturally based political correctness. All who disagree or take issue with the ruling elite and their plan for global domination are dismissed as scurrilous racists and haters.
Please share this.
Posted by alpha411net at 10:50 AM