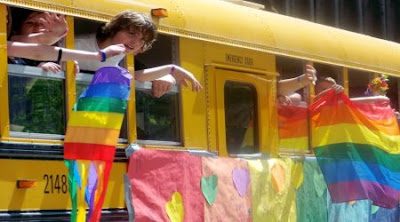 Members of California’s biggest teachers union plotted how to push LGBT politics on children and undermine concerns about their tactics from parents, principals, and communities, reveals leaked audio from an October conference of the California Teachers Association (CTA).

“Speakers went so far as to tout their surveillance of students’ Google searches, internet activity, and hallway conversations in order to target sixth graders for personal invitations to LGBTQ clubs, while actively concealing these clubs’ membership rolls from participants’ parents,” Abigail Shrier reported on Thursday.

Three people from the “2021 LGBTQ+ Issues Conference” in Palm Springs, Calif., titled “Beyond the Binary: Identity & Imagining Possibilities,” sent recordings to Shrier revealing the radical content of some of the workshops.

Multiple seminars at the conference encouraged hosting LGBT clubs for middle schoolers. An audio clip reveals teacher Lori Caldeira explaining why such clubs keep no rosters, noting, “Sometimes we don’t really want to keep records because if parents get upset that their kids are coming? We’re like, ‘Yeah, I don’t know. Maybe they came?’ You know, we would never want a kid to get in trouble for attending if their parents are upset.”

Caldeira has noted in a separate podcast appearance that, in the club she runs that includes other people’s prepubescent minors, “What happens in this room, stays in this room.”

At the CTA conference, Caldeira and another teacher, Kelly Baraki, led an additional seminar about “How we run a ‘GSA’ [Gay-Straight Alliance club] in Conservative Communities,” and discussed their strategies for how to “get the bodies in the door” and ensure kids keep coming back when “we saw our membership numbers start to decline.”

“When we were doing our virtual learning – we totally stalked what they were doing on Google, when they weren’t doing school work. One of them was googling ‘Trans Day of Visibility.’ And we’re like ‘check.’ We’re going to invite that kid when we get back on campus,” Baraki admitted. “Whenever they follow the Google Doodle links or whatever, right, we make note of those kids and the things that they bring up with each other in chats or email or whatever.”

Caldeira also acknowledged that she leverages her role of running morning announcements to further push LGBT ideology on children and their families.

“I’m the one who controls the messaging. Everybody says, ‘Oh, Ms. Caldeira, you’re so sweet, you volunteered to do that.’ Of course I’m so sweet that I volunteered to do that. Because then I control the information that goes home,” she says in one of the recordings. “And for the first time, this year, students have been allowed to put openly LGBT content into our morning announcement slides.”

“The principal, she may flinch, but she [flinches] privately,” Caldeira added.

After Baraki and Caldeira angered parents by using an “anti-bullying” presentation to teach kids what it means to be gay or lesbian, they explained to conference attendees that “Next year, we’re going to do just a little mind-trick on our sixth graders.”

She highlighted the objection of one mom who had hoped to wait before having to talk with her middle school student about sex and gender “identities,” before ridiculing the parent’s reaction.

“I know, so sad, right? Sorry for you, you had to do something hard! Honestly, your twelve-year-old probably knew all that, right?” Baraki said in the leaked conference recording, according to Shrier. She also called it a “win” that another objecting parent had been encouraged to move their child to a private school before boasting that “I have tenure! You can’t fire me for running a GSA. And so, you can be mad, but you can’t fire me for it.”

Neither Baraki, Caldeira, nor the Spreckels Union School District that employs them replied to Shrier’s requests for comment.