She denies she was close to the Communist rulers in East Germany, where she grew up.

So this 1972 photo of her in military-style uniform has left German Chancellor Angela Merkel ‘not amused’.

Then called Angela Kasner and aged 17, she is shown happily involved in a civil defence exercise under the gaze of an East German officer. 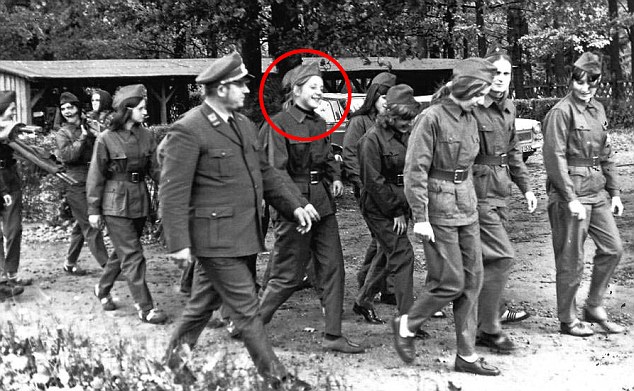 Mrs Merkel (circled) who was 17-year-old Angela Kasner when the picture was taken in 1972, is shown in fatigues marching with a group of friends and an East German officer 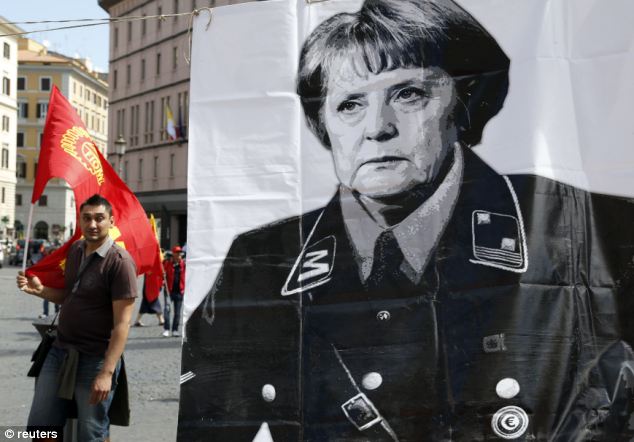 A member of Italy's metalworkers union walks by a banner with a picture of German Chancellor Angela Merkel during a demonstration in Rome. The unrest came as Mrs Merkel tried to dampen speculation over her links with East German communists

All children had to take part if they wanted to go to university, but Mrs Merkel is also alleged to have been a propaganda secretary for the youth movement, the FDJ.

The photo was found by an old schoolfriend, Sonja Felssberg, 58, and handed to a German newspaper.

Her smile is easily recognisable and her forage cap is set at a jaunty angle as she strides along at the High School Hermann Matern in Templin, where she was brought up behind the iron curtain.

Not even illness or a death in the family allowed for the youngsters to skip the martial lessons - they were simply postponed but had to be completed.

Sonja Felssberg, now 58 and an old school comrade, found the photo and handed it to a national German newspaper. 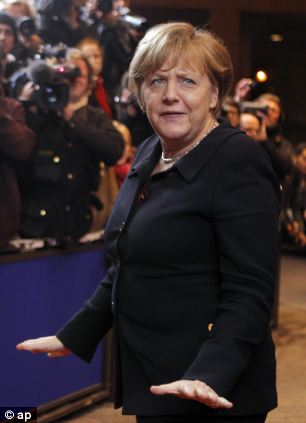 It was published as Mrs Merkel, who was the subject of austerity protests in Italy at the weekend, tried to play down allegations in a new book that she was much closer to the Communist rulers of the lost Socialist state than she previously admitted to, including holding a post as a propaganda secretary in the youth movement the FDJ.

Mrs. Felssberg said: 'We all had to sleep ten to a room in bunk beds when we did the exercises. In the day we learned things like treating wounds and stabilising patients - not much different from what you would learn today in first aid training with the Red Cross.

'But we also had to march and learn to use maps and a compass for hikes in the woods and wilderness. It was long ago but I remember it very well - and Angela.'

Mrs. Merkel is aiming for a third bid in office in the autumn.

She is hoping that the rumours about her alleged closeness to the politburo of East Germany will not diminish her chances.

But the photo of the old days has reportedly upset her.

One of her aides said: 'Madam Chancellor is not amused'