'The news industry is in trouble': Canadian media outlets 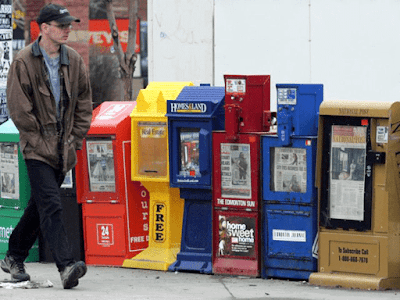 In a plea for long-demanded tax and regulatory changes, a large group of news companies is expressing grave concern about the future of the “vibrant media ecosystem in Canada” and the “health of news and of democracy.”

A letter urging Parliament to act and addressed to Prime Minister Justin Trudeau was signed by an eclectic group of media outlets, including Postmedia, which owns the National Post, Torstar, which publishes the Toronto Star, SaltWire Network, and the CBC among others.

“The news industry in Canada is in trouble,” the letter says. “A strong democracy depends on diverse sources of trusted news.”

Among the changes requested by the group are modifications to Canadian tax rules for digital companies, changes to copyright protection and beefed up competition regulation.

The Section 19 tax rule that allows companies to deduct advertising expenses for ads purchased from global online giants like Facebook and Google has vexed media organizations for years and has even attracted scrutiny from Parliament.

Two years ago, a Senate committee studied the issue and recommended the government revisit the rule, which the committee said “contributed to the media industry’s decline.”

Those rules were written in 1996 for “an analogue economy,” the letter reads. During the recent election campaign, the victorious Liberal Party said it planned to address the issue and proposed a three-per-cent tax on the incomes of large digital companies operating in Canada.

The letter also decries the fact that Facebook and Google suck up about three-quarters of digital ad revenue in Canada partly by linking to journalism produced by traditional outlets.

“At the same time, these players have contributed to a flood of disinformation and fake news which is undermining civil discourse,” the letter reads.

The news outlets also argue that it’s “essential” that regulators gain access to the algorithms used by companies like Facebook and Google to determine which content gets displayed on the platform, to help guard against anti-competitive behaviour.

The letter also encourages the government to crack down on large global companies that are “scraping and republishing news content without permission or payment,” which likely could be addressed with amendments to the Copyright Act.

A press release accompanying the letter says that news outlets have been exploring ideas for sharing content and resources as a response to the shrinking newsrooms in almost every form of journalism. For example, in Winnipeg, the CBC and Winnipeg Free Press have been sharing resources on the weekends and sharing stories across their platforms.

The Liberal government earmarked $600 million in last year’s budget to be spent over five years on tax credits and incentives for news outlets that have seen their business models disrupted by the changing digital landscape. The controversial decision was a flashpoint during the recent election and Conservative leadership candidate Erin O’Toole has pledged to cancel the funding if he becomes prime minister.

The program makes some media outlets eligible for refundable tax credits, provides a non-refundable tax credit for subscriptions to Canadian digital news and gives access to charitable tax incentives for not-for-profit journalism.
Please share this.
Posted by alpha411net at 11:07 AM