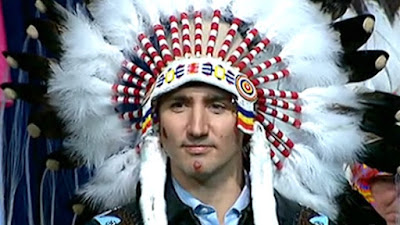 Justin Trudeau, Prime Minister of Canada, was very unhappy that
the Liberals gained no seats in Saskatchewan or Alberta. In addition,
his support from aboriginal communities was declining rapidly. He
decided to visit a small aboriginal town in Alberta to demonstrate his
support and improve on the Liberal polling numbers. He knew he could
get some wide media exposure if he could provide support the community
in a tangible way.

Upon arriving in the village and after the usual greetings, he
immediately asked what were the most pressing needs.

"We have two basic needs, honourable Sir," the elder replied.
"Firstly, we have a small hospital, but no doctor."

“Chief”, he said, “as the Prime Minister of this great country I
will fix that problem right now.” The CBC camera was rolling and
Trudeau whipped out his smartphone and made a call. After speaking
for a while he hung up and told the chief not to worry any longer, a
doctor would be assigned and sent to the village very soon.

Then he asked, "And what is the second problem?"

"...secondly Sir, we desperately need cellphone service because
there is none anywhere in this village."