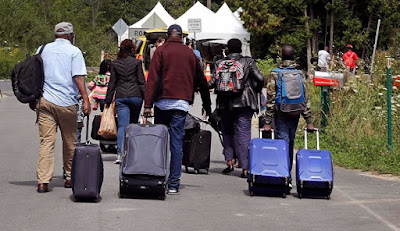 There is no accountability, and no assurances to Canadians from the Trudeau government about assimilation plans, vetting  procedures and potential security and safety issues — clearly the Canadian government has learned no lessons from the crisis in Europe.

Overwhelmed by asylum claims from irregular migrants crossing the U.S. border, the Immigration and Refugee Board is fast-tracking “less complex” cases from selected countries.

On Tuesday, refugee judges began assessing claims under what is known as a file-review process — meaning a decision is made based on submissions from claimants — without a hearing — and a short-hearing process, where there are few disputable issues.

“These new instructions are examples of initiatives recently put in place to slow the growth of the inventory and wait times for claimants,” refugee board chairman Richard Wex told the Star. “By matching our efforts with the complexity of each claim, we are using our resources more effectively, which will result in more refugee claim decisions.”

The latest statistics show the board has more than 73,000 outstanding claims and the wait time for a hearing now hovers at around 24 months. Many of the claims are from asylum seekers who came through the U.S.-Canada border since late 2015 after U.S. President Donald Trump came into the office with a mandate to crack down on illegal migrants.

In December, the board started triaging the claims based on two newly created lists of countries and claims. In total, 25 refugee judges have been assigned to the new effort.

To qualify for the file-review process, a claimant must be from one of 14 countries: Afghanistan, Burundi, Egypt, Eritrea, Iran, Iraq, Libya, Pakistan, Saudi Arabia, Sudan, Syria, Turkey, Venezuela and Yemen.

However, not every claim from these countries will be automatically expedited.

For instance, only those Saudi Arabian claims alleging persecution based on gender or religious sect can be assessed without a hearing. For asylum seekers from Libya, claims must involve corruption, extortion, kidnapping or threat of kidnapping by militias.

Only some claims from 11 countries are recommended for short hearings: sexual orientation persecution in the Bahamas, Barbados, Iran, Russia, Rwanda and Venezuela; fleeing criminality and corruption in Nigeria, Peru, Saint Vincent and St. Lucia; and threats in Djibouti due to one’s political opinion and activism…..
Please share this.
Posted by alpha411net at 4:40 PM