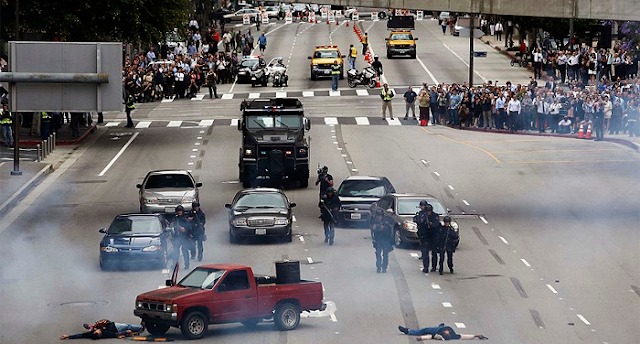 The world renowned hacker activist group “Anonymous” issued one of their civic-minded warnings yesterday on behalf of the people of Los Angeles. Anonymous has indicated that they have information which leads them to believe that a false flag event similar to the twin tower attacks in New York is in the works for the Citi Bank building. The chief tenant of that building at this time is Freddie Mac.

They are specific in their information, with the attack expected on Friday, November 15th. They indicated that their information alerted them to SWAT drills being conducted in the downtown area in a manner different from other drills which have been recently carried out. They did not specify in what way they were different.

They also stated that the insurance coverage for the building has been dropped with the exception of those portions of coverage which provide for special conditions, physical damage, and coverages related to terrorism. Those coverages remain in effect, according to Anonymous’ sources. They identify the certificate holder for the insurance Hines Vaf.

In addition to the Citi Bank building, the adjacent US Bank building is also named as a possible target in the Anonymous warning. They recommend that people avoid the buildings in particular this Friday, but the window for a possible terror event appears to be for several days. The buildings are located at the intersection of South Flower and West Fifth St. in Los Angeles.

Anonymous does not claim to have concrete proof of plans to destroy the building(s), but they found enough similarities between this possible event and the suspicious circumstances surrounding the attacks of September 11th that they chose to err on the side of caution by coming forward with the information at this time.

Just over five months ago, extensive terror drills were held in Los Angeles as part of the 2013 National Homeland Security Conference. It is a well-documented fact that there are invariably terror drills of a very similar nature conducted prior to virtually every suspected false flag operation from 9/11 and Oklahoma City all the way up to the recent LAX TSA incident. The information provided to Anonymous also references recent, less publicized drills.

This, in addition to the changes in the insurance coverage, gave rise to the reasonable suspicion that something reprehensible may be in the works.